2013 Contenders: The Brightworking, by Paul B. Thompson 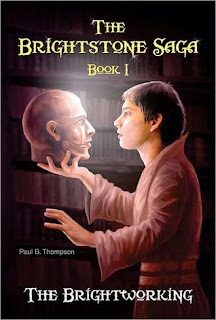 A few months ago, Rachael wrote a review of Jennifer A. Nielsen's The False Prince. In it, she discussed the idea that plots -- and fantasy plots in particular -- that are "derivative and predictable" can serve a purpose. They can teach young readers about the foundational tropes and symbols of the genre, and they can create books that move quickly and keep the reader's attention.

Multiply that by 100, and you've got The Brightworking, the new book by Paul B. Thompson, who's probably best known for co-writing a slew of Dragonlance books. The novel tells the story of Mikal, who is "gleaned" from his village in a scene that makes one half expect someone else to Volunteer As Tribute, and then shipped off to serve the Guild of Constant Working (which, I have to say, is one of the best-named organizations I've heard of in a while). While there, he makes a friend named Lyra, is apprenticed to a powerful wizard of questionable morals, and becomes part of a sweeping series of events that promise to have Lasting Consequences For Everyone Involved.

The emphasis here is on action. The plot moves forward as quickly as humanly possible, and though the setting is reasonably vibrant, there's nowhere near the attention to world-building or peripheral characters that a fan of Harry Potter or The Hobbit might desire. However, it's impossible to get bored while reading The Brightworking, and Mikal and Lyra practically fly from one adventure to another. The ending is a bit of a cliffhanger; books two and three are coming soon, to the point that their ISBNs are already printed on the back cover.

The key here is probably to understand that this novel is published by Enslow, who usually puts out high-interest nonfiction series (Rebels of Rock, People to Know Today, When Wild Animals Attack!). This book seems designed with reluctant readers in mind, from the conceptual level down to the simple, uncomplicated prose. And for that audience, I think it's remarkably successful.

The Brightworking has a 0% chance of showing up on any ALA awards list this year, and for very valid reasons. However, it's a book that fills a valuable niche -- something simultaneously exciting and safe, something that a kid still learning the joy of reading can hold on to and love.


Published in September by Enslow.
Posted by Sam Eddington at 10:15 AM