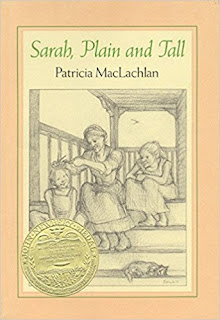 As Sarah, Plain and Tall opens, Anna and Caleb are living on a farm somewhere in the endless prairies of the American west. Their Mama died the day after Caleb was born; although their Papa cares for them with kindness, he no longer sings, and their family is both smaller and sadder than before. However, Papa has placed a newspaper advertisement seeking a bride, to which the titular Sarah has responded. Her month-long trial visit with Papa and the children occupies the bulk of Patricia MacLachlan's novella, which took home the 1986 Newbery.

Sarah, Plain and Tall is a good candidate for the quietest book in the Newbery canon. The stakes are almost purely emotional, and revolve around the children's hopes for a life that includes Sarah, and their fears that she might return to her beloved Maine coast. Many of the scenes feature Sarah learning various farm tasks, which she approaches with full dedication. Other than Papa, the children, and Sarah, the only characters with any speaking lines within the book's 58 pages are a neighbor couple who come to help with some of the plowing.

And yet, at least in my opinion, Sarah is one of the crowning achievements in American children's literature. Its simply-structured prose has a numinous quality that makes it read like poetry; I've read precious few children's books that are as beautiful as Sarah. No words are wasted. The book's stunning imagery also gives us a window into the minds and hearts of the characters -- it's full of emotion, but emotion that is shown, rather than told, as creative writing instructors like to say. We feel Anna's nostalgia and hope, Caleb's frenetic dithering between joy and fear, and Papa's tender sadness as if they were our own.

At the center of it all is Sarah, who is complex and lovable and real. She contains an honest mix of loneliness, openness, and confidence. Although it's Maggie, one of the neighbors, who comes up with what is perhaps the book's central line ("There are always things to miss, no matter where you are."), it's Sarah who embodies it in both its melancholia and its comforting acceptance. If I were Caleb or Anna, I would want Sarah to stay too.

The resolution of Sarah's plot is perhaps given away by the fact that MacLachlan has written four sequels, starting with 1994's Skylark. But the plot isn't what makes Sarah -- it's the feelings of the characters, the vastness of the place, and the carefully-constructed fugue of imagery that raise the book to the level of masterpiece. Not every deeply emotional event is loud and dramatic, and MacLachlan shows tremendous respect for this fact.

The Newbery committee named two honor books in 1986: Commodore Perry in the Land of the Shogun, by Rhoda Blumberg, and Dogsong, by Gary Paulsen. Several other books that were eligible have become classics  -- at the very least, we have to mention The Polar Express, by Chris Van Allsburg, The People Could Fly: American Black Folktales, by Virginia Hamilton, and The Castle in the Attic, by Elizabeth Winthrop. But despite the stiff competition, I think the committee made the right choice here. Sarah, Plain and Tall genuinely represents the best of American children's literature.
Posted by Sam Eddington at 3:18 PM No comments: