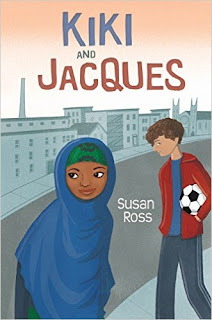 On the surface, Jacques, a lifelong resident of his rural Maine town, seems to have little in common with Kiki, a Somali refugee who, with many of her family and friends, has only just arrived. However, a bond soon forms between the two, which might just help them overcome a raft of difficulties that come their way.

There's a lot going on in Susan Ross' debut novel -- probably too much. Between the arrival of the Somali refugees, the financial difficulties threatening Jacques' grandmother's bridal shop, Jacques and the captaincy of his soccer team, a girl with an obvious crush on Jacques, Jacques' alcoholic father, Kiki's desire to play soccer, the attempts by a neighborhood lout to bully Jacques into committing crime, a possible romance for Jacques' grandmother, and probably a few I've forgotten, it's an incredibly complicated plot, and given that Kiki and Jacques clocks in at a brisk 144 pages, many of the elements get a perfunctory treatment, and many of the characters don't feel completely developed.

And yet, I enjoyed reading Kiki and Jacques in spite of all that. It's never boring, and it gets a lot of mileage out of a setting (small-town Maine when Somali refugees begin settling there) that's  underused in children's lit. Especially given all of the political talk about refugees going on in the US right now, the book feels more than a little timely, and I imagine plenty of libraries will want to put Kiki and Jacques on their shelves.

I don't see it placing in the Newbery lists; it has distinguished elements in setting, but it's not the masterpiece of construction and writing that several of the year's leading contenders are. I'd certainly like to read some more from Susan Ross, however, and I hope this book brings her work to the notice of many readers.


Published in October by Holiday House.
Posted by Sam Eddington at 11:42 AM No comments: 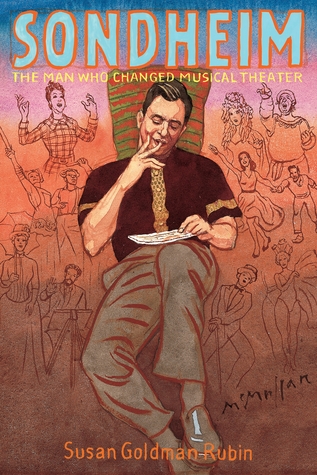 Librarians from the Eastern Shore of Maryland (and some from the other side of the bay too) met to discuss six candidates for our Mock Caldecott medalist. When we cast our votes, the winners were...
Winner: Drowned City: Hurricane Katrina and New Orleans, by Don Brown
Honor: Wait, by Antoinette Portis
Thanks to everyone who attended, and especially to our discussion leaders, Julie Ranelli and Natalie Lane. Special thanks to Heidi Hammond and Gail Nordstrom for their wonderful presentation on reading the art in Caldecott books. It was a fun day!

Long-time readers of this blog may ask why we held a Mock Caldecott rather than the usual Mock Newbery. Well, we wanted to try something new. I started the Mock Newbery several years ago as a opportunity for local librarians to hone their book evaluation skills. I was really excited about it at the time, but the last couple of years I have noticed my excitement waning, so Sam and I decided it was time to get excited about something else.

(I am always excited about art - especially picture book art - but I had never really immersed myself in the critical language of evaluating that particular medium.)

What does that mean for the future of About to Mock? Well, we don't have any plans to close up shop (especially since we just added Tess!) but the format of the blog may change slightly next year. More on that to come.

Posted by Rachael Stein at 2:09 PM No comments: