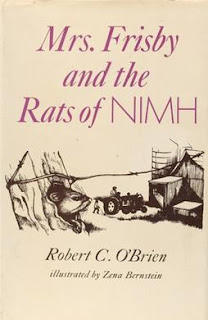 Mrs. Frisby is a mouse, raising her four children alone after the death of her husband. When her youngest, Timothy, takes ill, Mrs. Frisby tries to find a way to help him -- a task that will take her into places she didn't know existed, and eventually lead her to a group of superintelligent rats, who have mysterious ties to her husband's life.

This brief summary hardly does justice to one of the genuine classics of American children's literature. It's a treasure of a book, one that, its high concept aside, works because of the real, lived-in relationships between its characters. This holds true not only for the novel's central relationships (such as those between Mrs. Frisby and Nicodemus; Mrs. Frisby and her children; and Nicodemus and Jenner in the flashback section), but for those that are more subsidiary (Brutus and Justin; Mr. Ages and Nicodemus), and even for those that exist at the very periphery of the story (Jeremy and the Owl; Mr. Fitzgibbon and Paul).

To move one step further back, the relationships work because the characters are so carefully defined. Each figure in the story has real hopes, dreams, sorrows, and fears. The mice and rats who occupy most of the novel's space are as emotionally rich as any human character would be. It helps that they occupy a world that's open-ended -- though the plot comes to a satisfying end, many threads aren't fully tied off, and many mysteries remain.

Mrs. Frisby and the Rats of NIMH also reads as a surprisingly, even defiantly feminist novel. Rachael has often referred to Mrs. Frisby herself as the greatest single mother in children's literature, and I think that's a more than fair opinion. Mrs. Frisby doesn't have the genetically engineered smarts of the rats and Mr. Ages, the ancient wisdom and intimidating presence of the Owl, or the overwhelming physical superiority of Mr. Fitzgibbon and the other humans. Yet, whether comforting her children, rescuing Jeremy the crow, or risking her life in putting sleeping powder in Dragon the cat's food (the same task that killed her husband!), Mrs. Frisby shows herself repeatedly to be the bravest, fiercest, most big-hearted character in the book. The rats may have the kind of patriarchal society in which "the females sometimes went to meetings and sometimes not," but without Mrs. Frisby, they'd all be dead by the end of the story. (Mrs. Frisby has only a handful of other female characters, but I'd also point to the shrew, who is willing to stand in the doorway of Mrs. Frisby's house to protect it from an entire group of much, much larger rats, although she's mistaken in their motivations, and the rats pose no danger.)

The literary career of Robert O'Brien (whose real name was Robert Conly) was an unfortunately curtailed one. Though a journalist by profession, working for such prestigious publications as Newsweek, the Washington Times-Herald, and National Geographic, he didn't begin writing novels until his mid-forties, when he developed glaucoma, and had to move closer to his office, freeing up for writing the time he had formerly used in commuting. He published three books during his lifetime, of which Mrs. Frisby and the Rats of NIMH was the second; a fourth, Z for Zachariah, was completed from his notes by his wife and daughter following his tragic death from a heart attack at 55. However, even though we have only a few pieces of fiction from O'Brien's pen, Mrs. Frisby alone would have been enough to secure his legacy.