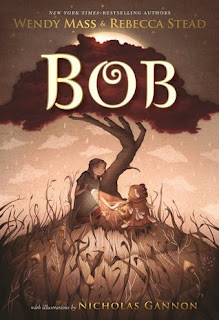 Ten-year-old Livy and her family are visiting her grandmother in Australia for the first time in five years. Livy can't remember almost anything about her previous visit, but soon finds someone who remembers it very well indeed -- Bob, a strange green creature who's been living in Gran's closet, waiting for Livy's return. Although Bob remembers Livy perfectly, his memory before that is a complete blank. Against the backdrop of Gran's drought-ridden farm and town, Bob and Livy begin trying to unravel the mystery of Bob's past and identity.

I enjoyed the time I spent with Bob immensely. It's a sparkling blend of whimsy, melancholy, mystery, and magical realism. The novel is constructed of chapters in alternating voices, one from Livy's perspective, followed by one from Bob's. Both voices are strong and complex, with solid characterization. The setting -- a desiccated, half-withered rural town and its surrounding farms -- is also carefully rendered.

In reading Bob, I noted its structural similarities to Rebecca Stead's other work. Bob starts with several disparate plot strands, and then winds them ever-closer together until they whirl into a unified whole. It's the same technique that undergirds When You Reach Me and Liar & Spy, and although the target audience for Bob might be slightly younger than that of those two novels, the basic plan is no less effective. I'm much less familiar with Wendy Mass's career, but I do note that the prose in Bob is less sparse and open than Stead's usual style (and the novel is also not set in New York City), so perhaps that's Mass's doing.

At any rate, Bob is a first-rate book, and one that I'd recommend highly. It's still too early to get a sense of its Newbery chances, but I imagine that this is one that will at least get some discussion from the committee.

Publication in May by Feiwel and Friends / MacMillan
Posted by Sam Eddington at 2:20 PM No comments: