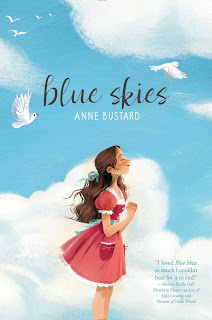 Life is complicated for fifth-grader Glory Bea Bennett. Her father was lost on Omaha Beach, and is listed as MIA -- but Glory Bea is sure that he's coming home, just like he promised. This means that she isn't taking much of a shine to Randall Horton, her father's old friend from the military who seems to be taking too much of an interest in Glory Bea's mother. But one of the Merci Boxcars -- forty-nine railroad boxcars sent to the USA from the grateful people of France -- is going to be stopping in Glory Bea's hometown of Gladiola, Texas, on its way to the state capital in Austin. Glory Bea is sure that boxcar will bring her father home.

I had a hard time fully engaging with Blue Skies. Part of this, if I'm being honest, was because reading about Glory Bea constantly reminded me that I'd already encountered that particular piece of wordplay in another children's novel. But more so, it was because I felt like Blue Skies never fully took flight. Many of the plot points seemed awfully familiar to me, from a child character refusing to believe that a family member who perished in WWII is actually dead, to the trauma resulting from combat service in WWII, to a child trying to break up their parent's new relationship.

A well-worn plot can, of course, be magic in the right hands, if the details, setting, and characters bring it to life. Probably the area in which Blue Skies does best is the setting -- the (fictional) town of Gladiola rang true to me, and the bits about the Merci Boxcars do a great job of highlighting a nearly-forgotten slice of American history. Overall, however, I often felt like I was having trouble remembering the book even while I was reading it.

It's possible that readers with an affection for historical fiction or mid-20th-century Americana may find and love Blue Skies. It's hard for me to imagine that it will garner a mass following though, or that it will tick enough boxes for the Newbery committee to show it some love.


Publication in March by Simon & Schuster
Posted by Sam Eddington at 10:34 AM No comments:

Newbery Wayback Machine: Up a Road Slowly, by Irene Hunt (1967) 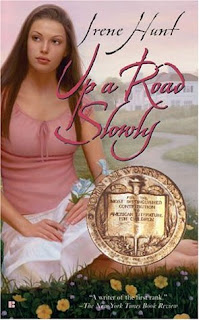 Up a Road Slowly, Irene Hunt's 1967 Newbery winner, covers ten years in Julie Trelling's life, from the time she loses her mother at the age of seven, to her graduation from high school at seventeen. During this period, she lives with her Aunt Cordelia, a stern schoolteacher who nonetheless softens as the narrative progresses. She also deals with her dissipated Uncle Haskell, falls in, out, and in love, and navigates changing family dynamics, as marriages and moves alter circumstances.

I didn't much care for Up a Road Slowly as I read it, and my assessment didn't really change after I finished it. It's a pale copy of a copy of Anne of Green Gables (1908) or Little Women (1868-69) -- heck, Julie's personal goal, to become a writer, is exactly the same as that of Anne Shirley and Jo March, and though the book mercifully ends before Julie enters the working world, she comes from a whole family of schoolteachers (which, you may remember, is the profession that both Anne Shirley and Jo March enter). But Julie is a good deal less memorable than her predecessors; I finished the book feeling like I didn't really know her all that well.

Part of the problem is that the book covers ten years in less than 200 pages (in my edition), which means that it's racing at breakneck speed through the whole process, casually mentioning events that have never been recounted, and generally telling, not showing. One of the reasons that Anne and Jo feel so alive is that we have plenty of time to linger on their adventures and learn their individual quirks -- Little Women also covers ten years, but is easily twice as long as Up a Road Slowly, and the timeline of Anne of Green Gables and Anne of Avonlea (1909) combined is only six years or so.

There are other issues too: the prose feels deliberately affected and old-fashioned, even for the time; I never really got to like Aunt Cordelia all that much; and there are some passages that feel awfully dated now. The worst of these last is probably the part where, when Julie is seven, two boys forcibly hold her arms back while a third, Danny Trevort, kisses her. After Julie, justifiably in my opinion, punches Danny in the face and gives him a black eye, Aunt Cordelia tells her "that a small boy's kiss was hardly in as poor taste as a small girl's physical violence." Though Cordelia eventually revises her opinion to admit that "the boys certainly have their share of the blame for this unfortunate episode," it just wasn't enough for me. Julie actually ends up dating Danny at the conclusion of the book, but I still came out of it wishing that I was reading about Anne and Gilbert Blythe instead. It's way funnier when Anne cracks the slate over Gilbert's head, and a good deal less rape-y to boot.

Clearly, I'm the wrong audience for Up a Road Slowly. As for the Newbery? Well, it wouldn't have been my choice, but I don't think it was an obvious mistake. The 1966 publishing year wasn't the strongest of the decade. Other than the three Honor books, The King's Fifth, by Scott O'Dell; Zlateh The Goat and Other Stories, by Isaac Bashevis Singer; and The Jazz Man, by Mary Hays Weik, the only other "classic" book from the year I can identify is Lloyd Alexander's The Castle of Llyr. The Alexander book would have been my choice, but given that he had already won a 1966 Honor for The Black Cauldron, and would later win the 1969 Newbery for The High King, his Prydain books are pretty well represented in the Newbery canon. Even if I don't think Up a Road Slowly is all that good, I can't identify anything I think was obviously slighted. All years aren't created equal.