2019 Contenders: The Key to Every Thing, by Pat Schmatz 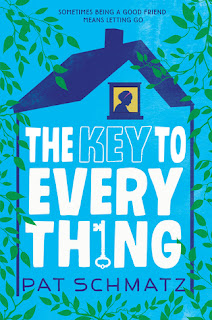 Tash lives with her great uncle Kevin, and next door to Cap'n Jackie, an older woman who provides a sort of quasi-maternal presence in Tash's life. This summer, Tash has to go to camp, which she emphatically does not want to do. Right before she leaves, she has a huge argument with Cap'n Jackie, which comes to a climax when Tash throws a key at Cap'n Jackie -- a key that's a sort of talisman for the magic that the Cap'n believes infuses the world.

When Tash returns, Cap'n Jackie is gone -- in inpatient treatment after a terrible fall -- and the key is missing. The Key to Every Thing traces Tash's attempts to get through to a now-silent Cap'n; it also gradually reveals the story of Cap'n Jackie's life, Tash's unorthodox living situation, and the deep fears at the center of Tash's heart.

The best parts of The Key to Every Thing, in my opinion, have to do with Tash's struggles to overcome the rage and sadness inside her. The internal monologue felt real and true to me. I also enjoyed the portions in which Tash and her friend Naomi are sneaking around the rehab center, which have a bit of an E. L. Konigsburg vibe to them.

I was less enamored of the book's structure. The ending especially, which involves a Letter That Explains Everything, felt sort of cheap to me. But I think this was partly because of my other issue with the book, which is that Cap'n Jackie never quite came into focus to me as a person, rather than an aggregation of quirks and plot points. That affected my reading experience, because the Cap'n is clearly intended as the emotional center of the book. I feel like Schmatz knows who Cap'n Jackie is, but I didn't feel like the book managed to fully communicate this information to me as a reader.

Pat Schmatz's career has garnered its share of plaudits -- among others, Lizard Radio won the James Tiptree, Jr. Literary Award in 2015, and Bluefish made the Notables list in 2012. I'm not sure that The Key to Every Thing will make any of the ALSC lists in 2019, but I've certainly been wrong about these things before. We shall see!


Publication in May by Candlewick Press
Posted by Sam Eddington at 10:21 AM No comments: