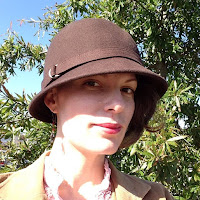 It's with a heavy heart -- but also with a lot of gratitude -- that I announce that Rachael Stein, who co-founded this blog with me back in January 2012, will no longer be contributing in this space. She's moved to the exciting (and important!) world of correctional libraries, and won't be involved in children's services in her new position, and so she felt it was time to step away from For Those About to Mock.

I could tell you about the professional debt I owe her, how I probably wouldn't have become involved in ALSC, or participated in the Morris Seminar, or known half of what I know about children's literature without her. But instead, I'd like to invite you to take a stroll back in time to revisit some of her greatest hits.

- Rachael was (and is) a huge fan of Jeanne Birdsall's Penderwicks books. In her review of The Penderwicks in Spring, which was Rachael's most-read post of all time, she provides a thoughtful, nuanced examination of the penultimate volume in that series. Also worth a second look is her final review for this site, a discussion of the series' conclusion, The Penderwicks At Last.

- I always appreciated Rachael's ability to defend her opinions about books, even if they were a bit out of the mainstream. To take two stellar examples, witness her argue for the Newbery eligibility of Tom McNeal's Far Far Away, and then thrill to her encomium of the "only skink" in her review of Polly Horvath's Mr. and Mrs. Bunny -- Detectives Extraordinaire!

- Rachael's writing was often at its most entertaining when she encountered a book she really didn't care for. One of my favorite instances is her review of The Island of Dr. Libris, by Chris Grabenstein ("...if you hand it to to the literary-minded kids you know, I won't even judge you. Much."). And then there's her legendary look back at Eric P. Kelly's 1929 Newbery winner, The Trumpeter of Krakow, which she at one point refers to as "Project Runway: Medieval Krakow."

Farewell from this space, Rachael! The correctional library is lucky to have you!
Posted by Sam Eddington at 1:27 PM No comments: