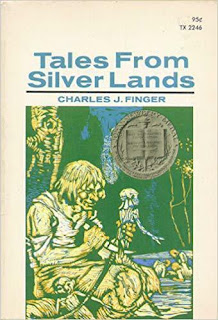 The Newbery Terms and Criteria loudly proclaim, "there are no limitations as to the character of the book considered except that it be original work." And indeed, over the past ninety-odd years, we've had winners representing novels, poetry, nonfiction, picture books, graphic novels, biographies, and verse novels; nearly every form has taken home the gold medal at one point or another. This includes folktale-style short stories, which have won twice -- once for Arthur Bowie Chrisman's fakelore stylings in Shen of the Sea (1926), and the year before that, when Charles Finger's Tales from Silver Lands was named the winner.
The titular "Silver Lands" are Central and South America. Unlike Chrisman's "China" tales, Finger's have at least some authenticity to them. He lived and traveled extensively in those areas during his twenties, and this book comes across as having its genesis in those times. Though Finger doesn't provide the kind of source notes we'd hope for in a book of folktales today, he does at least provide the names of his informants and the place where he learned the stories for some of the tales. (Others are given no introduction at all, and the place and culture to which they belong remains opaque.) Finger does freely admit to having heavily edited some of the stories he was told in order to make them more readable; more than once, he interrupts himself in order to complain about the discursive, meandering manner in which his informants told the tales.
Questions about authenticity aside, the stories in Tales from Silver Lands certainly have the feel of folktale collections like those of the Brothers Grimm -- eerie characters, symbolism that would make Jung proud, and a general feeling that they proceed from that state between waking and dreaming. Highlights include the Sorcerer's Apprentice-style "The Tale of the Lazy People," the trio of tales involving a pair of brothers ridding the land of three destructive giants, and the closing story, "The Cat and the Dream Man," which features the most unsettling of the villains in the book, the Fox-Faced Man, as well as an ending reminiscent of Grimm 187, "The Hare and the Hedgehog."
Two Honor books were named in 1925, Nicholas: A Manhattan Christmas Story, by Annie Carroll Moore, and The Dream Coach, by Anne & Dillwyn Parrish. Left off the list was the book that would become the most enduring American classic of the year, Gertrude Chandler Warner's The Boxcar Children. There was probably no chance that The Boxcar Children could have won, given that "children having adventures without an adult" was actually sort of controversial at the time, and the Newbery was in its Tales From Far-Off Lands period -- the only winner from 1923 to 1933 that didn't spend at least part of its plot in some exotic locale was Smoky, the Cowhorse. However, Tales from Silver Lands is certainly better than some of the other early winners, even if it hasn't become part of the kidlit canon.
Posted by Sam Eddington at 10:51 AM No comments: 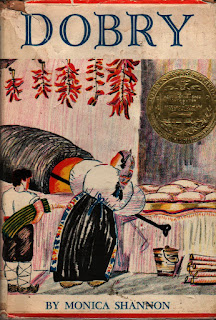 That's not even a particularly exaggerated description of Dobry, the Monica Shannon book that took home the 1935 Newbery Medal. The book has almost nothing in the way of plot or conflict; the closest it really gets is a two-page discussion between Dobry's mom and his grandfather about whether or not Dobry should grow up to become an artist. Mom doesn't think so, Grandfather argues in favor of it, and mom resolves not to worry about it anymore, and doesn't. End scene. Back to descriptions of Bulgaria.

Dobry's nameless village is populated by characters who are more or less colorful, but none of them are villains, or even real annoyances. Indeed, the only really frightening thing involves reading about what the villagers do for fun. As the book opens, everyone is looking forward to the arrival of the "gypsy bear," who gives massages. I assumed this was just some big, strong, hairy guy -- but no, when the Romani show up a few chapters later, they have an actual bear in tow, which they've trained to walk on people's backs and give massages. Later, Grandfather is excited to try and win the Snow-Melting Games. I don't know what I expected those to be, but I did not figure that they would simply involve lying down in the snow to see whose body heat would melt the snow the fastest. And near the very end, Dobry wins the village's equivalent of a scholarship by diving into the frozen river to retrieve a golden crucifix that the priest has thrown in there, because this is a contest they hold every feast day of St. John the Baptist (Feb. 7). I'm just saying -- if these were my entertainment options, I'd probably be excited to go to art school too.

The book was apparently partly based on the early life of its illustrator, Atanas Katchamakoff. It took the Newbery ahead of three Honor books: Pageant of Chinese History, Davy Crockett, and A Day on Skates. The most famous children's books of the year were by non-US authors -- P.L. Travers' Mary Poppins and Kenji Miyazawa's Night on the Galactic Railroad -- and so weren't eligible. Even if I can't think of a single modern child I'd recommend Dobry to, it's certainly evocative of its place, and that may be enough to justify its award.

Posted by Sam Eddington at 10:25 AM No comments:

Newbery Wayback Machine: The Summer of the Swans, by Betsy Byars (1971) 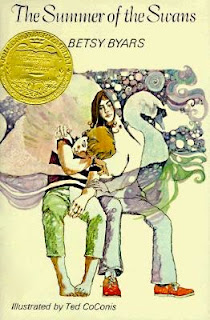 Fourteen-year-old Sara Godfrey is having a difficult time, in a way that I think a lot of people her age -- or who have ever been her age -- would understand. She's hyper-conscious of what she considers to be her plain looks and unpopularity at school; her emotions are swinging wildly; and she's struggling in her relationships with her family. This family is a fragile unit -- Sara's mom is dead, and her beaten-down father works out of town, and only sees them on the weekends. The primary adult in Sara's life is her Aunt Willie, who loves her, but can be abrasive and difficult. Then there are her siblings, her attractive and popular older sister, Wanda, and her little brother, Charlie, who does not speak, and has some sort of intellectual disability -- his precise diagnosis, if he's ever been given one, is never stated in the book, but his symptoms as described might place him on the autism spectrum.

All of this makes Sara self-centered, in a manner that nearly every teenager experiences at one point or another. But one morning, Charlie is missing, and Sara begins searching for him; in the process, she begins to challenge her assumptions about herself, her family, and the other people around her.

For a book whose main plot is "the race to find a missing child," The Summer of the Swans is strangely subdued. It's a character study, rather than a thriller, and the plot elements exist largely to bring out different facets of Sara and the people around her. I think the book succeeds wildly on those terms -- I felt like each person in the book was someone who might well exist. The change in Sara's character also felt plausible and right to me. It's the perfect blend of "enough, but not too much," especially given the book's compressed timeframe. (It's really more like The Forty-Eight Hours of the Swans.)

I also loved the lyricism of the language. The descriptions of the swans themselves, both on the pond near the book's beginning, and in flight near the end, are lushly poetic without becoming highfalutin. I was also struck by the passage near the end, in which Sara compares life to a series of steps, which are different for each person, and on which each person is making different progress. I wish I'd written it, which is the best compliment I know how to pay.

The Summer of the Swans is almost fifty years old now, and there are a handful of passing cultural references of questionable sensitivity, which it might be worth mentioning to a child reader before giving them the book. It's a beautiful jewel of a novel, though, one which may not be a huge crowd-pleaser, but which rewards a thoughtful, introspective reader. The 1971 awards drew from a crowded field (including not only the three Honor books, Knee-Knock Rise, Enchantress from the Stars, and Sing Down the Moon, but also Frog and Toad Are Friends, Runaway Ralph, and The Trumpet of the Swans). I think The Summer of the Swans was a perfectly good choice for the Newbery even in that company, which is high praise indeed.

Posted by Sam Eddington at 3:00 PM No comments: