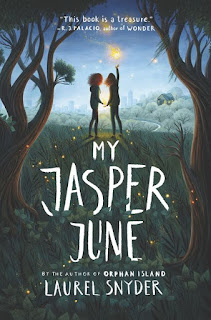 After a terrible tragedy last year, Leah finds herself in a holding pattern, distanced from her friends, her neighborhood, and her parents. One summer day, alone and restless, she takes a walk by the creek, and meets another girl, a free spirit named Jasper. Leah and Jasper quickly become inseparable -- but the tensions in Leah's life, as well as Jasper's own dark secrets, won't be denied, and eventually threaten to tear the new friends completely apart.

There are two things that I think My Jasper June does exceptionally well. The first is its respectful, honest portrayal of the inner lives of its main characters, girls at the awkward intersection of tween and teen. This was also a feature of Laurel Snyder's previous novel, Orphan Island (which won our 2017/18 Maryland Mock Newbery), and represents one of her key strengths as a writer. Leah and Jasper both felt real and recognizable to me, which helped me care about their adventures and fortunes.

The other area in which My Jasper June excels -- perhaps more so than any other book for children that I've ever read -- is in its laying bare the double bind that those grieving a traumatic loss often find themselves in. At the very moment when they need the most support, they often experience isolation, as those around them no longer know what to say to them or how to act around them, distancing themselves from the griever as a result. Without going too far into sad details from my own experience, I'll say that I've seen this dynamic and the pain it causes in real life, and Snyder does magnificent work in limning it. The scene in which Leah finally loses all patience and calls a school teacher out on this behavior at the public swimming pool is cringey in exactly the way the incident might play out in reality.

In a lot of years, My Jasper June would be my immediate choice for Newbery frontrunner. This year also features The Lost Girl and The Moon Within, so it's more complicated than that. But it's at the very least in the conversation, and I heartily recommend that you pick it up and have a look for yourself.


Publication in September by Walden Pond Press / HarperCollins
Posted by Sam Eddington at 1:07 PM No comments:

The Ones That Got Away: The Last Martin, by Jonathan Friesen 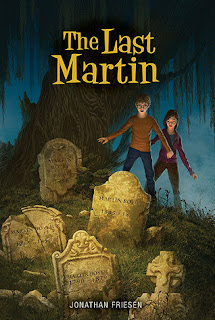 Sometime back in 2011 or 2012, I was at a library conference, wandering the exhibits, and happened by the Zonderkidz booth. Jonathan Friesen was there, signing copies of his new book, The Last Martin. He was kind enough to sign one for my daughter, and I passed the book on to her after the conference.

This is the kind of story that's happened dozens of times during the course of my library career. But this time was different, because my daughter devoured this book, returning the verdict that The Last Martin was her FAVORITE BOOK EVER. To this day, that's an opinion that she stands by. Regardless of what other books she may read in the future, I think it's safe to say that, at the very least, The Last Martin stands as one of the defining novels of her childhood.

In the wider world, Friesen is an author who's picked up a big ALA award (the 2009 Schneider Award, teen division, for Jerk, California), and The Last Martin garnered starred reviews from Kirkus and School Library Journal. The book didn't show up in the Newbery rolls in 2012, however, nor did it make the Notables list. As of this writing, it's still in print, but doesn't seem to have attracted a significant following outside of my daughter -- the most recent reviews on Amazon and Goodreads are both from 2016.

But, that's the thing about books. Sometimes, a book simply happens to be the perfect book for a reader at a specific point in time, regardless of said book's popularity. When I think back on the books that I remember with exceptional fondness from my own childhood, that list includes well-known titles such as Corduroy, The Hobbit, and Interstellar Pig. It also includes an obscure, mostly forgotten Barbara Dillon/Chris Conover picture book, The Beast in the Bed. Ranganathan's Third Law of Library Science, after all, is "Every book its reader," and that's as true now as it was in 1931, when Ranganathan wrote it.

As for The Last Martin, it's the story of middle schooler Martin Boyle, an unassuming budding writer, who lives with his little sister, Lani, his frenzied, germophobic mother, and his father, a professional military reenactor. On an annual visit to the family cemetery, Martin makes the startling discovery that, beginning with the 1790 birth of his military hero namesake, there has always been a Martin Boyle -- and that every time a new Martin is born, the previous Martin dies. Since Martin's aunt is six months pregnant, and plans to name her new baby boy Martin, does this mean that the current Martin is cursed to die in three months? It's up to Martin and his ragtag group of friends -- his best buddy, Charley; his crush, Julia; and Poole, a Huck Finn-esque orphan who's been living in an abandoned boxcar in Martin's backyard -- to solve the mystery and end the curse before Martin's time runs out.

On a purely literary level, I can see why The Last Martin didn't win any ALA awards. The characterization is often cartoonish, some of the pacing seems occasionally off, and the prose is competent without being particularly noteworthy. But I can also see why my daughter loves it -- there's mystery, humor, romance, and a group of friends banding together to overcome a seemingly insurmountable problem.

And maybe the lesson I should take from the book is that a novel doesn't have to be "perfect" to be enjoyable. I spend a lot of time evaluating and analyzing books, enough so that I sometimes forget that a story can sweep you away and draw you in even if it doesn't check every box that a literary award-winner would. The Last Martin has plenty of flaws, but it also tells a fascinating story -- a story that has found at least one lifelong fan.
Posted by Sam Eddington at 10:11 AM No comments:

Email ThisBlogThis!Share to TwitterShare to FacebookShare to Pinterest
Labels: Magical Realism, The Ones That Got Away
Newer Posts Older Posts Home
Subscribe to: Posts (Atom)