2021 Contenders: Lily to the Rescue, by W. Bruce Cameron 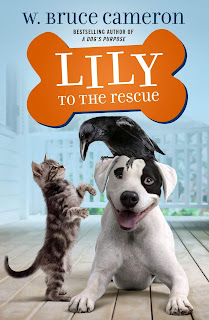 When my stepdaughter was younger, her favorite genre was something that I referred to as "animals in mild peril." These are books where the protagonist usually has a parent or other relative who works as a vet, or a wildlife rescuer, or something similar, and where the plot will revolve around one specific animal's journey. The literary apotheosis of this type is probably something like Elana K. Arnold's A Boy Called Bat, and there are dozens of series with names like Animal Ark and Vet Volunteers that cover this ground at length.

W. Bruce Cameron is best known for his adult work (A Dog's Purpose; 8 Simple Rules for Dating My Teenage Daughter), but he's no stranger to the Animals in Mild Peril realm; in fact, Lily to the Rescue is a spin-off from Cameron's earlier Puppy Tales series. It's narrated by the title character, a rescue dog who works at a shelter, helping to comfort and socialize the other animals. Her special human is Maggie Rose, whose mom also works at the shelter. Lily reports what she sees and hears accurately, but her interpretations of events are often wrong, which is the source of much of the novel's gentle humor.

The plot involves Lily and Maggie Rose's rescue of an injured crow named Casey. There aren't any surprises here to anyone familiar with the genre, but the characters are warmly written, and the book's brisk pace means that it doesn't overstay its welcome. Lily to the Rescue isn't complex or powerful enough to be a real Newbery contender, but it's got more depth than most of its competition; given that it's going to be the starting point for its own series, readers who eagerly devour this sort of thing should plan on spending some time with Lily.


Publication in March by Starscape / Tom Doherty Associates / Macmillan
Posted by Sam Eddington at 11:11 AM No comments: