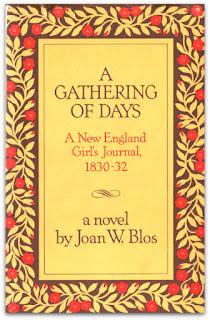 Nowadays, when I think of novels in diary form for children, what comes to mind are snarkily humorous books such as Diary of a Wimpy Kid and Dear Dumb Diary. Indeed, although there are plenty of YA examples (I Capture the Castle, So Much to Tell You, Z for Zachariah, The Absolutely True Diary of a Part-Time Indian, The Bunker Diary, etc.), I had a difficult time thinking of "literary" diary-novels for younger readers beyond A Gathering of Days, Catherine, Called Birdy, and Love That Dog.

And, if I'm being honest, A Gathering of Days, Joan W. Blos's 1980 Newbery winner, isn't far from being a YA book itself. The protagonist, Catherine Hall, is thirteen when the novel starts, and almost fifteen when it ends. The tone of the book is deliberately old-fashioned, however, and reminded me much more of Lucy Maud Montgomery and Laura Ingalls Wilder than of anything we'd think of as "modern" YA.

I think I might have enjoyed A Gathering of Days more if it were not in diary form, actually. Although Blos is able to use the format to drop in some intriguing slice-of-life details, such as the maple sugaring process, I felt like most of the characters were thin and underdeveloped. The diary entries aren't long -- I don't think a single one ran to three pages in my copy -- which means that the book is constantly flitting from scene to scene, and dialogue is at a minimum. The spotlight simply can't rest on any given character for long. As such, certain plot points, such as the death of Cassie, Catherine's best friend, didn't bring me the emotional power they were intended to.

It's not a spoiler, by the way, to say that Cassie eventually dies, because this information is initially conveyed on the very first page of the book. Blos elected to give the diary a brief "frame story" in the form of letters, written by a much older Catherine to her granddaughter, that open and close the book. The initial letter gives away some of the most important plot points -- not only Cassie's death, but Catherine's father's remarriage, and Catherine's eventual departure from her farm. It seemed like a baffling choice to me, since it has the effect of removing most of the dramatic tension from the novel.

It's possible that Blos simply wasn't concerned with dramatic tension. I noticed as I read that most of the events in the book didn't build to much. Catherine's friend Sophy moves away to work at a mill, but there's no real payoff; it's just a thing that happens. Even the biggest non-spoiled plot thread, involving a runaway slave in need of help, felt oddly subdued to me.

Perhaps the Newbery committee was more enthralled than I was by the unorthodox format and historical detail of A Gathering of Days. Either way, the Newbery was probably deserved; in hindsight, the 1979 publishing year was a relatively weak one for children's literature. Only one honor book was named (The Road from Home, by David Kherdian), and I'm not aware of any hidden classics that would have been eligible. I think A Gathering of Days is a minor entry on the Newbery rolls, but given the competition, it was an entirely reasonable choice for the 1980 Medal.

Posted by Sam Eddington at 3:22 PM No comments: