After a two-year hiatus, we're once again hosting the Maryland Mock Newbery! This year's event will be held at the Kent Island branch of the Queen Anne's County Library on January 18, 2018. If you're hoping to attend, please contact me and I'll get you registered.

Landscape with Invisible Hand, by M.T. Anderson
A Boy Called Bat, by Elana K. Arnold
See You in the Cosmos, by Jack Cheng
Patina, by Jason Reynolds
Orphan Island, by Laurel Snyder

I'm excited for the discussion, and to see what our group votes to the top!
Posted by Sam Eddington at 8:26 AM No comments: 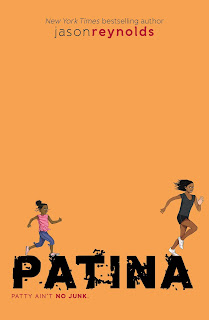 One of the perennial questions that comes up in Newbery discussions is whether or not a given book "stands alone" -- that is, can the reader easily find their way into and out of it without having already read a book that comes before it, or needing to read another that comes afterward.

To be clear, there's nothing in the Newbery criteria that require a winner to stand alone. Indeed, the committee has, on occasion, given the gold medal to books that almost certainly don't. (The High King [1969] is probably the most obvious, but arguments can also be made about The Grey King [1976] and Dicey's Song [1983] at least.) It's something of a rarity, however.

All of this brings us to Patina, the second novel in Jason Reynolds' Track series. It follows 2016's Ghost, which I had missed, and will be followed by Sunny, which is scheduled to be published in April of next year. (One assumes that, at the very least, Lu will follow at some point thereafter.) At any rate, I approached Patina without having any background knowledge of the series, and for what it's worth, I found it difficult when separated from the rest of its series.

The Track books each follow one of the four new runners on the Defenders track team. Patina Jones, the title character of Patina, is trying to prepare to run a relay race for the first time, while also dealing with many challenges off the track. Her mother is largely disabled, and so Patina and her younger sister, Maddy, are living with their uncle and aunt. Patina, who is black, is attending a new school, an upper-class, heavily white, private academy; it's a vastly different place from her previous, more integrated, public school. She's trying to take care of herself, while at the same time looking out for her younger sister, and the pressure wears on her.

I was able to catch up to the story eventually, but the first chapter especially left me feeling ungrounded; it was full of characters I felt like I should already know, in a setting that felt like it should have been familiar. And (spoiler alert!) the novel ends with Patina running the last leg of her relay, sprinting for the finish line, and then...well, I don't know. There's no conclusion at all -- it's a pure cliffhanger, which one assumes will be resolved in the next book.

Patina has plenty of good points -- the characterization and voice, especially, are clear and strong. The pacing seemed off to me, but it's possible that problem might disappear in the context of the whole series. But make no mistake: this book demands to be read in concert with the others. I found it difficult indeed to evaluate in a vacuum. If I had to guess, the fact that Patina doesn't stand alone will probably keep it off the Newbery podium this year; I'll be curious to see how my opinion of it changes, however, when I read the whole series.


Published in August by Atheneum / Simon & Schuster
Posted by Sam Eddington at 10:25 AM No comments: