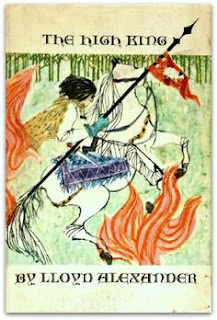 Lloyd Alexander was a favorite writer of mine as a child -- in addition to the Chronicles of Prydain, I enjoyed The Cat Who Wished to Be a Man and The Wizard in the Tree -- but for whatever reason, I haven't spent much time with his work in recent years. As such, although I didn't exactly approach The High King with no preconceptions, I did feel like I was able to come to it with relatively fresh eyes at least.

One of the more interesting things to me about The High King as a Newbery winner is its place in its series: it's the fifth (and last) of the Chronicles of Prydain. Although books that were sequels had won before (The Voyages of Doctor Dolittle, 1923), and would win again (Roll of Thunder, Hear My Cry, 1977; Dicey's Song, 1983; and A Year Down Yonder, 2001, among others), The High King marked the first time that a book further along in its sequence than first or second took the medal. Interestingly, as of this writing, it's only happened once since then: when Susan Cooper's The Grey King, the fourth book in her The Dark is Rising series, took the 1976 Newbery.

Alexander, in his author's note, claimed that The High King could be read on its own. After reading it without refreshing my memory of the others, I can tell you that this is...sort of true. It's certainly possible to follow the basic plot, and Alexander is careful to drop a bit of backstory into his descriptions of people and places in order to make sure the reader is up to speed. (Spoilers follow.) However, much of the middle of the book follows our protagonist, Taran, as he travels across Prydain gathering people to his banner in preparation for the confrontation with the forces of Arawn, the Dark Lord. The gist of what happens is that Taran is able to muster a mighty force because of the connections that he's made during his adventures in previous books. These passages lack the punch they're supposed to pack when read in isolation; they come across more as "here's someone you've never heard of! and they love Taran! they totally have so much history together!" None of this is really Alexander's fault -- and when one reads the entirety of the Prydain books, it's a weakness that completely disappears -- but it does mean that, no matter what the author's note claims, you really should start at the beginning with this series.

The general arc of The High King holds no surprises for anyone with a grounding in epic fantasy. What makes the book work is the characters -- the open-hearted and self-effacing Coll, the blusteringly good-hearted Fflewddur Flam, the ruthlessly utilitarian Pryderi. Taran himself is much more three-dimensional than many other fantasy heroes, which gives the story much more emotional heft than it might otherwise possess.

That said, he's still not the most interesting character in the book, which would be the brilliant and courageous Princess Eilonwy. I've seen a lot of memes and articles about the Harry Potter series that make the claim that it would be deeper and more satisfying if it were centered on Hermione; I think that kind of argument definitely applies to The High King. Taran is fine, but Eilonwy is amazing, and if the story were recast as her heroic journey, it might well be perfect. This feeling is strong enough that it colors my view of the ending. It makes logical sense, as the story is laid out, for Eilonwy to give up her powers as an enchantress and stay with Taran out of love, but my inner feminist wanted to see her sail off to the Summer Country as an enormously powerful, immortal, and fearless woman.

Regardless of my quibbles, I don't have a real argument against The High King taking the Newbery. The 1968 publishing year was a rich one: the Honor books were To Be a Slave and When Shlemiel Went to Warsaw and Other Stories, and the committee gave nothing to Ramona the Pest, Escape from Witch Mountain, or A Wizard of Earthsea. That's a list of classics, but The High King stands worthily with them, and is certainly a legitimate choice to put at the top.
Posted by Sam Eddington at 3:49 PM