Here I am! The slacker of For Those About to Mock with my 1920's review for the Newbery Wayback Machine. I have excuses, none of them great, as to why it took me so long to read this book, but look I made this cool gif, so hopefully you'll forgive me! 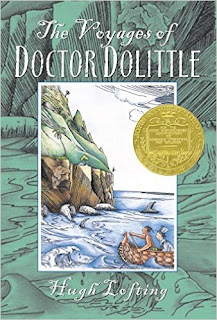 The Voyages of Doctor Dolittle is actually the second of Hugh Lofting's Doctor Dolittle books (there are 12 of them total!) and it was the winner of our illustrious Newbery medal in 1923. Lofting got the idea for Doctor Dolittle during World War I. He didn't want to write home about the brutalities of war, so he filled letters to his family with fantastic stories instead.

Voyages is told from the perspective of Tommy Stubbins, who is about 9 when the book begins and about 11 when the book ends. He lives in a quaint English town, Puddleby-on-the-Marsh, where his father is a cobbler. Stubbins is an interesting kid. His family doesn't make enough money for him to go to school, so he spends his days hanging out with his three best friends, "Joe, the mussel man," "Matthew Mugg, the cat's meat man," and "Luke the Hermit." Okay...

Stubbins has a fondness for animals which leads him to saving a wounded squirrel and eventually bringing that squirrel to renowned naturalist, John Dolittle. Dolittle is an animal doctor, and he's sort of the greatest animal doctor of all time because he can talk to animals, and by that I mean he has learned the languages of hundreds of animals and can actually converse with them.

(Real talk: I chose this book as my 1920's selection because as a girl I was entranced by the Academy Award winning musical Doctor Dolittle starring Rex Harrison. Also whenever asked "If you could have a super power what would it be?" I always choose "The power to understand animals" because I've always wanted to talk with my dog. Although she'd probably just say "Are you gonna eat that?!?!" over and over and over again. Really I ought to rethink it... But getting back on track!)

Stubbins asks his parents if he can live with Doctor Dolittle so he can apprentice with him and learn to become a naturalist and speak the languages of animals too. And they let him. Okay...

But the Doctor never stays in Puddleby too long, despite his many patients, and glorious garden, to occupy him. He prefers to be traveling, exploring new lands, meeting exciting animals. When he learns that his fellow naturalist, Long Arrow, son of Golden Arrow, has gone missing, and was last seen on the mysterious Spider Monkey Island, he and Stubbins, along with Bumpo, an African Prince and acquaintance of the Doctor, and a few of their animal friends, set sail to see what they can discover.

Here's all you really need to know about John Dolittle: He always sorts out whatever problem comes his way. He doesn't go about it in the most traditional way, but he always saves the day. For instance, he's never been classically trained in nautical arts, but he can get you anywhere you need to go on a boat. You never have to worry when Doctor Dolittle is around. If you have something that needs fixing, he'll do it, usually in the most unexpected way.

The Voyages of Doctor Dolittle is delightful book for children. As an adult I personally found it repetitive. The Doctor gets a man off the hook for a murder charge by questioning his dog on the witness stand! The Doctor ends bull fighting on a particular Spanish island by wagering he can win a bull fight by simply communicating with the bulls! The Doctor saves an entire primitive native village from war, famine, and disease! I get it, the Doctor is incredible! Perhaps a little too incredible! As a child I probably wouldn't have been able to get enough of the Doctor's prolific adventures. As an adult I felt like they were overkill. In fact the adventure that is most foreshadowed in the book, that I looked most forward to, the Doctor finally coming face-to-face with the illusive great glass sea snail, felt so anti-climatic after all the other many adventures, that I just wanted to go back to quiet Puddleby and take a nap.

Also I really disliked the character of Polynesia, a hundreds-year-old parrot who travels with the Doctor and helps to educate Stubbins. Again, as a child I probably would have been besotted with this intelligent bird. As a cynical codger I found her to be a know-it-all, and a bit of an asshole (I asked Sam and Rachael if there was a nice way to say I thought the parrot was an asshole and they told me to just say it! So I have! Come at me Polynesia!)

I think the magic of Voyages lies with at what age you read it, and also what edition you get a hold of. It's pretty much impossible to read an original version of this book now. In fact this beloved Newbery winner went out of print in the good old U S of A for over a decade! When it was reissued, publishers chose to edit and omit parts of the book that were... well... racist. Some people may want to hold that against the book and the author. My 2 cents: Lofting was a guy in the 1920's, writing about a guy in the 1820's, and I honestly don't think he was a raging hate monger. He was a man of the times, and the times have changed, but so has the book now.