About half way through my reading of Rabbit Hill I had the following conversation with my fellow blogger Sam:

Me: Soooooooooo does anything ever actually happen in this book?
Him: It's been a few years since I read it but at one point I think someone gives the rabbits some lettuce. Which in this book is the equivalent of a Fast & Furious style drift race with machine guns. Rabbit Hill is basically a cross between The Tale of Peter Rabbit and Waiting for Godot.
Me: *died laughing*

Luckily Sam hired a necromancer to bring me back so I could finish the book and write this review! 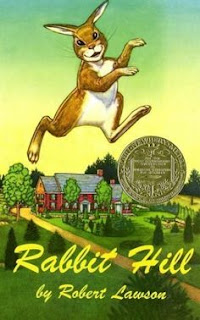 Rabbit Hill is a novel written and illustrated by Robert Lawson. It's about an area in Connecticut called "Rabbit Hill" and the assortment of woodland creatures who reside there. Times have been hard for the animals of Rabbit Hill. "Folks" haven't lived in the "Big House" for years, and without humans, and the food they grow (and throw away), things have been meager. The centerpiece of the community is without a doubt little Georgie, the most precious of the rabbit children (which, if I were any of the many other rabbit children, I would take umbrage with, but I digress) and Georgie's got big news. All signs point to new folks moving into the house soon! Will they be nice folks who will plant a big garden? Or will they be mean folks with guns and traps and poison?

The day to day goings on in the life of Georgie, his family, and their friends, are pleasant, and generally unexciting. Here are the top 3 most dramatic things that happen in the book:

Honestly I think I've been ruined of all books about rabbits since I read Watership Down by Richard Adams, without a doubt the most epic book written about rabbits (and heroism, and religion, and gender roles) of all time. The woodland creatures in Watership Down face life-or-death, intense, emotional moments on nearly every page, so subconsciously I was bracing myself for little Georgie to undergo some serious trials and tribulations.

I do feel the need to disclaim one thing: the folks, that is the family that moves into the house, around which most of the "action" of the book revolves, have a live-in maid/cook/servant, a "colored" woman named Sulphronia. Apparently in the original text, written before racial integration, the character is portrayed in African American stereotypes. But in every edition of the book published since the 1970's, like the copy I read, anything offensive has been edited out.

My favorite part of the book is the pictures. Lawson illustrated many well known books for children, including The Story of Ferdinand by Munro Leaf, and Mr. Popper's Penguins by Richard and Florence Atwater. He won a Caldecott medal for his own book They Were Good and Strong (1941) making him the only person so far to win a Caldecott and a Newbery medal! I felt the gentle drawings in Rabbit Hill indicated affection of the part of Lawson for his characters. Of course illustrations are not (supposed to be) taken into consideration during a Newbery deliberation, unless they make the book "less effective," which these do not, in fact they arguably make the book that much more effective, because they support the text. 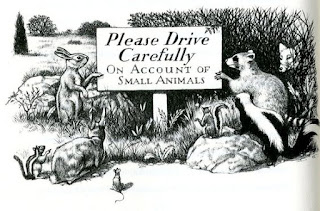 Onto the next decade!

(And Rachael, if Arnie lets you borrow his laptop and you're seeing this, hi!)
Posted by T at 10:24 PM