2015 Contenders: A Woman in the House (And Senate), by Ilene Cooper 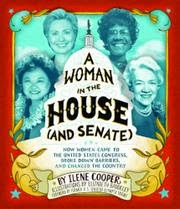 It was a mere 128 years after the first session of the United States Congress that a female representative joined that legislative body. There were legal, social, and political issues to be overcome, even after that first breakthrough. A Woman in the House (And Senate) both traces the narrative of women in Congress and provides detailed profiles of some of these notable legislators.

Some of the names were familiar to me: Clare Booth Luce, Geraldine Ferraro, Maryland's own Barbara Mikulski. Many others, however, I knew very little about, and I found myself enthralled by their stories. I read about Representative Jeannette Rankin of Montana, who was the first woman elected to Congress, and also the only person to vote against the United States' entry into both WWI and WWII; Senator Rebecca Felton, who was the first woman in the Senate, even though her interim appointment lasted only one day; Representative Helen Douglas, who gave Richard Nixon the "Tricky Dick" nickname; Representative Cardiss Collins, who worked so tirelessly for equality in college sports that she was enshrined in the Women's Sports Hall of Fame; and a whole host of others.

Ilene Cooper's writing is engaging, making what could be a dry recitation of facts into a vibrant collage of characters and achievements. Her research is also solid, and I found the source notes and other back matter thorough and easy to navigate.

The Newbery committee won't be able to consider the book's design, but the Sibert committee will, and they should find much to like. A Woman in the House (And Senate) features both vibrant illustrations by Elizabeth Baddeley and a wealth of archival photographs, and is a genuine joy to look at. The page design is both clean and engaging, and I think the choice to refrain from using sidebars was a wise one in this instance.

Ilene Cooper has made it to the Notables list before (Jack:The Early Years of John F. Kennedy, 2003), but hasn't received any of the big ALA awards. I think A Woman in the House (And Senate) may have a very good shot at changing that. It would very much be a Newbery dark horse, and I don't think I'd pick it over Caminar or Half a Chance. However, it's easily the best nonfiction book I've read so far this year, and if the Sibert committee is anywhere near as impressed by it as I am, it could easily show up in the list of winners at the 2015 YMAs.


Published in March by Abrams
Posted by Sam Eddington at 10:29 AM No comments: