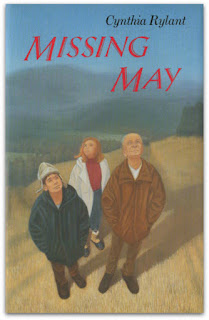 Several years ago, when I did my look back at the 2011 Newbery winner, Moon Over Manifest, I introduced my discussion of it by talking about a certain stereotype about books that have taken the medal:

"There's a kind of novel that we have a tendency to think of as The Newbery Book. It has a female protagonist, one right on the edge of adolescence. Invariably, she's motherless. It's set in a small town, one populated entirely with "quirky characters." It's probably historical fiction, and odds are good that it contains some life-affirming lessons about the power of literature, or art, or story."

Missing May, Cynthia Rylant's 1993 winner, hits many of these marks. Its twelve-year-old narrator, Summer, long ago lost her parents, and when the book opens, her aunt May, with whom she has been living, has also died. The book is set in the tiny town of Deep Water, West Virginia, and, although at the time of its publication it was contemporary, rather than historical fiction, many of its characters have their share of quirks. And, though Missing May isn't necessarily centered on Art or Story, those are certainly thematic elements that appear.

A noticeable distinction between Missing May and some of the other "Newbery Books" (Moon Over Manifest, The Higher Power of Lucky, Dicey's Song, etc.) is its focus, which is narrow almost to the point of insularity. May's widower, Ob, and Summer are trying to figure out how to go on with a May-shaped hole in their life, and although Summer seems at first glance to be muddling through, Ob is seriously struggling. Summer's attempts -- and those of her school acquaintance, Cletus -- to help Ob comprise most of the novel's relatively subdued plot. Outside of the quartet of Summer, Ob, Cletus, and (in flashbacks) May, I only counted three characters with speaking lines: Cletus's mother and father, who appear in one brief scene, and an unnamed man who shows up near the book's end.

In a way, it's fitting that Missing May tracks its main characters so tightly. This is a novel about the forgotten, the unwanted, the cast aside: orphans, elderly childless people, eccentrics, spiritualists. At one point, Summer describes the rest of the country's impression of West Virginia as "shut-down old coal mines and people on welfare." But in Rylant's sensitive hands, the challenges, hopes, and fears of these overlooked people take on genuine weight and power, equal to those of anyone else in fiction.

Of all the "Newbery Books" of this type that I've read, Missing May is probably my favorite. Rylant's spare, evocative prose positively sings, and its emotions are honest and clear without ever becoming sentimental or overwrought. There was plenty of competition for the 1993 Newbery: three Honor books were named (What Hearts, by Bruce Brooks; The Dark-Thirty, by Patricia McKissack; Somewhere in the Darkness, by Walter Dean Myers), and several other well-known and well-loved books didn't manage to make the list (some of the more prominent ones: The Silver Kiss, by Annette Curtis Klause; The Widow's Broom, by Chris Van Allsburg; Jeremy Thatcher, Dragon Hatcher, by Bruce Coville). But I think Missing May well deserves its win, and time has only served to make the novel more poignant and memorable.
Posted by Sam Eddington at 2:41 PM 2 comments: