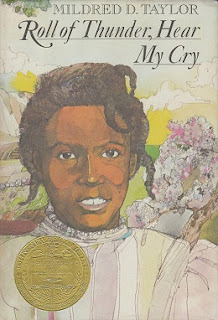 Cassie Logan lives with her family -- her parents, her three brothers, her grandmother, and a family friend, Mr. Morrison -- in rural Mississippi during the Great Depression. These are hard times and a hard place for a Black family, but the Logans have something that serves as their anchor -- four hundred acres of land, which they work and protect with fierceness and joy. However, neither the bonds of family nor the grounding of the land can save Cassie from a hard education in the racism of her surroundings. Incident after incident drives this point home, until a climatic summer night involving a robbery, a lynching attempt, and a fire that threatens everything the Logans have.
Roll of Thunder, Hear My Cry puts the reader so firmly in its setting that I could almost feel the red dust between my toes. This also extends to the characters, each of whom seemed three-dimensional and real. Each of Cassie's family members, all the way from Big Ma to her youngest brother, Little Man, have their own hopes and fears, dreams and desires. The secondary characters also come alive, with even the worst of them, such as the odious White storekeeper Kaleb Wallace, remaining rooted in reality. It's hard to overstate how well Mildred D. Taylor describes the place, time, and people in this novel.
As legendary children's literature critic Zena Sutherland once wrote (in a positive overview of the novel), "[Roll of Thunder] is not an unflawed book, but it is a memorable one." There are, indeed, some places where it's possible to quibble with the plotting; most notable to me is Little Man and Cassie's reaction to seeing their race written inside their school readers, which felt to me like it happens way too early in the book, given the way the overall plot arc involves the children coming to a realization of how permeated with racism the world around them is. But overall, the book works so well that my mind didn't linger on any plot difficulties or other blemishes.
1976 was a strong year for American children's literature. The 1977 Newbery Committee listed two honor books, Abel's Island, by William Steig, and A String in the Harp, by Nancy Bond; other well-regarded titles from the year include Frog and Toad All Year, by Arnold Lobel; The Missing Piece, by Shel Silverstein; and Summer of the Monkeys, by Wilson Rawls. Even in that company, Roll of Thunder, Hear My Cry stands as a worthy winner, and an enduring classic in the Newbery canon.
Posted by Sam Eddington at 11:16 AM No comments: 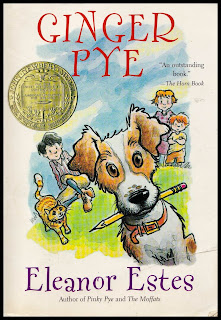 The title character of Ginger Pye is a fox terrier mix who belongs to ten-year-old Jerry Pye. The story covers the way they come together, and several of their ensuing adventures, until Ginger is abruptly dognapped halfway through the book. The remainder of the novel largely consists of the attempts of Jerry and his sister Rachel to locate Ginger, until the dénouement when they are reunited.

The world of Ginger Pye is a relatively small one; the scene never leaves the environs of the Pyes' hometown of Cranbury (a thinly fictionalized version of West Haven, Connecticut). That world, however, is outlined with a keen eye. I could clearly visualize the places, events, and, especially, the characters. The supporting cast, in particular, is described in ways that feel true to the ideas children have of other people. From Sam Doody, the captain of the high school basketball team, whom the Pye children look up to with barely-disguised hero worship; to the children's Uncle Bennie, who is only three years old, but worthy of profound respect, simply because he's an uncle; to Mr. Tuttle, who is one of the tallest men in town when seated, but only of average height when standing, because his height is concentrated in his torso -- they all seemed, not only like recognizable people, but those people as they might be described by elementary school-aged children.

This isn't a plot-driven novel, and the plot as it stands is probably the weakest element of Ginger Pye -- the confrontation between the Pye children and the dognapper seems like it's going to provide the climax of the book, but it never really happens. On the other hand, the plot isn't really the point; as in so many of these mid-century "family novels," the individual episodes are what the reader remembers after finishing the book.

As is often the case in books from the 1950s, there are some questionable racial attitudes in Ginger Pye. They're always mentioned more or less in passing -- I don't remember there being a single character of color on the book -- but they're there nonetheless, as when Rachel worries that that a whistle will bring a congregation of "Gypsies" around, or when she frets that a bee sting on her lip makes her "look like a Ubangi." It's the sort of thing one might want to discuss with a child reader before handing them the book.

Five Honor books were named in 1952: Americans Before Columbus, by Elizabeth Baity; Minn of the Mississippi, by Holling C. Holling; The Defender, by Nicholas Kalashnikoff; The Light at Tern Rock, by Julia Sauer; and The Apple and the Arrow, by Mary & Conrad Buff. I've never read any of them, so don't feel particularly able to talk about how they stack up to Ginger Pye, but I also note that none of them have become lasting classics. The best-known book that wasn't recognized by the Newbery committee is likely Ellen Tebbits, the second novel by Beverly Cleary. That one is well-regarded, but as far as I'm aware, isn't considered one of Cleary's top-tier titles. If parts of Ginger Pye perhaps haven't aged all that well, it was still one of the finest achievements in American children's literature for its year, and was a fine choice for the Newbery.

Posted by Sam Eddington at 3:31 PM No comments: