Newbery Wayback Machine: The Tale of Despereaux, by Kate DiCamillo (2004) 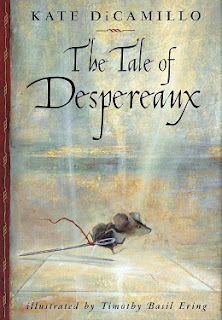 The Tale of Despereaux likely needs little introduction from me. It exists in the rarified air of A Wrinkle in Time, Mrs. Frisby and the Rats of NIMH, The Giver, and Holes -- Newbery winners that are eventually encountered by just about everyone who spends time with children's books. The last time that School Library Journal and Fuse #8 ran their Top 100 Children's Novels poll, Despereaux ranked #51, a placing that, if anything, undersells the book's popularity.

Kate DiCamillo is one of the most important American children's writers of the 21st century. She had already vaulted to prominence with her debut book, Because of Winn-Dixie, which had netted her a 2001 Newbery Honor, but Despereaux, her third novel, truly cemented her place in the firmament. Despereaux features all of her trademarks: an unlikely hero; a sweet relationship between a human and an animal; and moments of gentle humor mixed in with moments of deep tenderness.
The novel's structure builds as several plot threads are introduced -- one in which the titular hero, a tiny, misfit mouse, meets and falls in love with a princess, and then is thrown into a dungeon; one in which a rat named Chiaroscuro, torn between his love of the light and the dark nature of ratly culture, accidentally causes a national catastrophe; and one in which a small girl named Miggery Sow is sold by her father into a life of hardship and abuse. All of these stories converge in the second half of the novel, culminating in an ending both thrilling and compassionate.
Despereaux isn't a novel without flaws -- I may be in the minority, but I remain unenthused by the persistently intrusive narrator, and some of the descriptions of Miggery Sow start to shade uncomfortably into the physiognomic. However, they're minor flaws, and the book on the whole is a triumph.
The 2003 publishing year featured an embarrassment of riches in American children's literature. In addition to Despereaux, the year included two highly-regarded books that would end up as Honor titles (Kevin Henkes' Olive's Ocean, and Jim Murphy's An American Plague), two classic picture books (Mo Willems' Don't Let the Pigeon Drive the Bus!, and Mordecai Gerstein's The Man Who Walked Between the Towers), and Gregor the Overlander, the book that introduced a pre-Hunger Games Suzanne Collins to a wide audience. Even with that competition, however, Despereaux was and remains an uncontroversial choice for the gold medal.
Posted by Sam Eddington at 2:46 PM No comments: