2020 Contenders: The Moon Within, by Aida Salazar 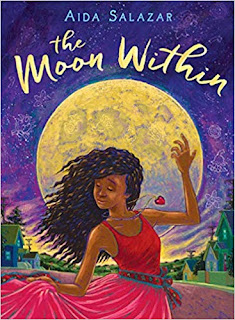 Sometimes, it's hard to realize how far children's literature has come until we stop and take a look back. This is not to say that there aren't still VERY real problems in the children's lit world, or that fighting for progress isn't still necessary, because neither of those things are true. But I think it's also important to note that the efforts of many authors, publishers, teachers, and librarians to advocate for diversity, inclusion, and a general expansion of "acceptable" content haven't gone for naught.

When I first started working in public libraries, in 2007, the kerfuffle du jour involved whether or not it had been appropriate to award the Newbery to a book that used the word "scrotum" (that'd be The Higher Power of Lucky, for anyone who doesn't remember that moment in time). And as recently as 2014 or so, my requests at major library conferences for information about LGBTQ+ books for middle grade readers was met with the sum total of "Tim Federle and Jennifer Gennari."

Now, less than a decade and a half since I started my library journey, I find myself writing a review of Aida Salazar's The Moon Within, a book being put out by a major publisher (Scholastic, on its Arthur A. Levine imprint). If you had asked me even three or four years ago if I'd thought a middle grade book of this type was publishable, I would have responded with a sad shake of my head. This is a verse novel starring a main character of Mexican/Puerto Rican ancestry, and her genderfluid best friend, in which the plot not only centers on a recreated indigenous Mexica ritual celebrating a young woman's menarche, but also includes a poetic but frank discussion of women's genitals, including the purpose of the clitoris. If you thought Are You There God? It's Me, Margaret didn't pull any punches, The Moon Within has never even heard of the concept of pulling punches.

But that's not to say that The Moon Within is confrontational for the sake of being confrontational. On the contrary, it's a novel filled with sensitivity and compassion for its characters -- especially its narrator, Celi Rivera. She comes across as a living, breathing person, one who sometimes makes good decisions and sometimes makes bad ones, but who's 100% worth cheering for. I wanted positive things to happen for her, and the book's climax filled my heart with warmth. You could, I suppose, refer to this as a "problem novel," but it's better described as an authentic-feeling, character-driven book that doesn't shy away from the kinds of issues that real people in real communities run up against.

If it's not clear, I genuinely enjoyed The Moon Within, and I'm more than a little glad to see this book published. I have no clear sense of the Newbery race yet, but the mere fact that the publisher is promoting this novel heavily warms my heart. I think Aida Salazar is a fascinating talent, and this is one heckuva debut.


Published Feburary 26th by Arthur A. Levine/Scholastic
Posted by Sam Eddington at 10:48 AM No comments:

Yes, once more, I greet you from a stop on a Walden Press blog tour. This one, however, is, if such a thing is possible, even more exciting than usual, because this one is for The Lost Girl, the new book by Anne Ursu. Ursu happens to be my favorite active children's author (which, given how much I love so many others, is high praise indeed), to the point that, although I promise that what follows is an honest review, I'm not sure I can even pretend that it's an unbiased one.

Here's how the back cover describes The Lost Girl:

"When you’re an identical twin, your story always starts with someone else. For Iris, that means her story starts with Lark. Iris has always been the grounded, capable, and rational one; Lark has been inventive, dreamy, and brilliant—and from their first moments in the world together, they’ve never left each  other’s side. Everyone around them realized early on what the two sisters already knew: they had better outcomes when they were together.

When fifth grade arrives, however, it’s decided that Iris and Lark should be split into different  classrooms, and something breaks in them both. Iris is no longer so confident; Lark retreats into herself as she deals with challenges at school. And at the same time, something strange is happening in the city  around them: things both great and small going missing without a trace. As Iris begins to understand  that anything can be lost in the blink of an eye, she decides it’s up to her to find a way to keep her sister safe."


So why is Ursu's new book so beautiful and special? I guess I'd have to say that, in that odd way in which these words apply to a work of fiction, it's 100% true. Every character, every relationship, every detail of this world feels lived in, cared for, and real. Ursu has always excelled at this kind of truth in her writing, and The Lost Girl is as impressive a demonstration as ever.

I don't dare give too much of the meticulously-constructed plot away here. But longtime Ursu readers will recognize the overall themes that have long interested her. How do people who don't "fit into" the world nonetheless make their way in it? What does becoming a better human being cost? And what is the nature of the most dangerous destructive force in the world -- the evil (to be reductive) that we all face?

As in her previous books, Ursu seems to argue in The Lost Girl that the answer to the last question is that evil works first by fracturing the relationships between people, and then by destroying each person's sense of their true self. This was true in Breadcrumbs, it was true in The Real Boy, and it's true in this novel as well.

Though there are plenty of differences between the two books, I actually found myself thinking that The Lost Girl was what Breadcrumbs might have looked like with a radically changed underlying emotion. Where Breadcrumbs was bleakly, desperately sad, The Lost Girl is instead charged with what I can only describe as ferocity. As she makes perfectly clear in the introduction, Ursu is furious about society's treatment of women and girls, and has absolutely no patience for anyone or anything on the giving end of that treatment. Indeed, The Lost Girl is the most "of its historical moment" book Ursu has written; unlike her previous two novels, The Lost Girl does have a proper villain (though it takes a very long time for this to become clear), and at one point, that villain uses language that's either directly taken from a certain world leader's Twitter account, or so close as to make no difference.

The thing about Ursu's ferocity, however, is that it cuts both ways. She fiercely loves her protagonists, and the other supporting characters who are trying, as well as they know how, to do the right things. The climax, especially, includes a moment that's as close to a combination of a fist pump and a group hug as I think Ursu is capable of writing, and it's amazing.

One other thing, which I wanted to separate from my review of/cheerleading for the book, but nonetheless wanted to write about. For longtime Ursu readers, The Lost Girl is as full of Easter eggs as a Marvel trailer, and I found them delightful. Here are a few that I found:

1) Iris and Lark attend Barnhill Elementary, and past and present teachers and staffers at Barnhill who are mentioned or make appearances include Ms. Messner, Ms. Urban, Ms. Snyder, Ms. Baptiste, and Ms. Ruby. If you know that Ursu is central to a closely-knit group of children's and YA writers who include Kelly Barnhill, Kate Messner, Linda Urban, Laurel Snyder, Tracy Baptiste, and Laura Ruby, this is utterly delightful, and feels like a loving tribute to dear friends. There's also a Mr. Anderson, whom Ursu stated is named after a beloved teacher of hers, Rod Anderson.

2) The Lost Girl features twins who live in Minnesota. Ursu is a MASSIVE baseball fan, and her team of choice is the Minnesota Twins. (Remember the signed Joe Mauer baseball that played such a key role in Breadcrumbs?). I'm sure the reference wasn't the only reason for the choice of setting and characters, but it still made me smile.

3) There is a calico cat in The Lost Girl. Ursu loves cats in general, but calico cats in particular. As evidence, I present to you this song, which was based on online conversations I had with Ursu several years ago.

And one last bit, which made me happy. Really happy. To help explain why, here is a picture of me for reference:

OMG THIS BOOK HAS A HEDGEHOG IN IT AND HIS NAME IS MR. PRICKLES AND IT IS THE BEST THING EVER.

True, Mr. Prickles is a very minor character, who advances the plot for a couple pages in the middle of the book, and then yields his space to the larger story. But he is there. And, especially since "Anne Ursu's new book has a hedgehog in it" is essentially a sentence algorithmically designed to insert joy directly into my soul, Mr. Prickles will always be there in my heart.

One final addendum: here is the schedule for the full blog tour!

Posted by Sam Eddington at 12:04 AM No comments: