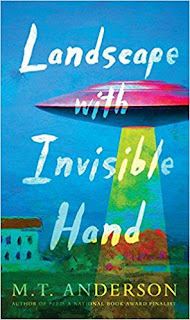 So, as it turns out, we were neither abducted by aliens, nor decided to decamp to some off-the-grid cabin far away from the blogosphere. Rather, a gigantic library software project has been the only thing we've had time to think about this summer, and we're just now managing to emerge, squinting, into the sunlight again. So to speak.

But enough about me. Much more interesting than my essay about How I Spent My Summer Non-Vacation is the latest M.T. Anderson book, Landscape with Invisible Hand. It's a story narrated by Adam Costello, a teenage artist living in a near-future Rhode Island. An alien race called the vuvv have made contact with Earth, bringing amazing technology, lifesaving medicine -- and completely destroying the human economy. The vast majority of jobs are now obsolete, and while a few rich people live in floating cities among the clouds, most humans live in misery, struggling to find anything to eat, drinking contaminated water, and threatening each other with physical violence over part-time food court jobs, for which there are dozens, even hundreds, of applicants.

Landscape with Invisible Hand, from its mocking, Adam Smith-referencing title to its final period, functions as a blistering satire of modern America. The vuvv are patronizing colonialists, self-congratulatory about their efforts on behalf of humanity, but either blind or indifferent to the immense suffering their arrival has inflicted. Despite the fact that there are nowhere near enough jobs remaining, humanity's leaders and rich elites blame the suffering of the majority on the majority's sloth and greed, refusing to do anything that might actually help the situation. Most art and music consists of shameless attempts to please the vuvv, whose concept of human culture is built out of  the detritus of the 1950s -- warmed-over doo-wop, uninspired still-life paintings, rockabilly clothes. Even the novel's ending casts some serious shade on the very concept of the "American Dream."

This being an M.T. Anderson book, Landscape does also have a bruised, but beating heart. Even the most odious of the core characters is recognizably human, and Adam's unbreakable desire for meaning and beauty manage to carry him through even the lowest points of the plot. I don't want to give it away here, but his monologue at the end of the chapter titled "A Small Town Under the Stars" is possibly the emotionally moving thing I've read this year.

Really, Landscape is a YA novel; I doubt it has any chance of showing up in the Newbery rolls, if only because its careful deployment of f-bombs would render all the pearl-clutching about the use of "scrotum" in The Higher Power of Lucky charmingly quaint. But the publisher's guidelines say the book is for ages 12 and up, and the Newbery is supposed to be for books for readers up to 14. I do think Landscape qualifies under the letter of the law, and it's a good enough book that, if I were on the committee, I'd urge everyone to give it a very close look.

Publication in September by Candlewick
Posted by Sam Eddington at 2:13 PM 1 comment: