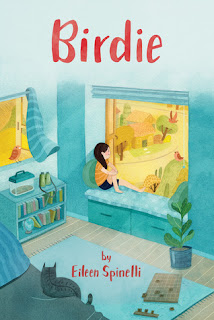 Amateur ornithologist Birdie Briggs is twelve years old, and her life is in flux. She's experiencing her first crush, which has consequences for the rest of her social life; her mother may have a new love interest for the first time since the death of Birdie's father, and even her grandmother, Maymee, has a new man in her life. It's a lot for Birdie to manage, and she's trying to learn how to adapt.

I felt like the best thing about Birdie, Eileen Spinelli's new verse novel, is the way it captures the shifting emotions of a not-quite-teenager. Sometimes she's elated, sometimes she's depressed, sometimes she's throbbing with inchoate anger, but Birdie's feelings all rang true to me. Being twelve is a difficult time in one's life, and Spinelli records Birdie's internal experiences with grace and sympathy.

Indeed, Birdie is a gentle novel all the way around, one where the action and conflicts are largely interior. Bad things happen in the book's world, to be sure, but they're overcome with tenderness and love. It's a story and a setting filled with warmth.

Longtime readers of this blog will know that I'm not much of a verse novel fan. Trying to set that personal preference aside, I can tell you that the pacing of the book seemed effective to me. I don't think that Birdie possesses the same level of technical mastery of The Moon Within or Caminar, but it's certainly competent. I don't know if I would have made the same choice that Spinelli did in giving each of the poems a title, but that's probably just my own predilection as a reader.

You should never take your Newbery odds from me -- I'm the guy who said "no picture book will ever win the Newbery" the year that Last Stop on Market Street won, after all. That said, I'm not sure that Birdie is going to rise to the top of what's already shaping up to be a hypercompetitive field for the 2020 medal. I do think that fans of Spinelli's writing, and readers who enjoy carefully-crafted interior worlds, will enjoy Birdie very much.


Publication in April by Eerdmans
Posted by Sam Eddington at 2:01 PM No comments:

2020 Contenders: Bat and the End of Everything, by Elana K. Arnold 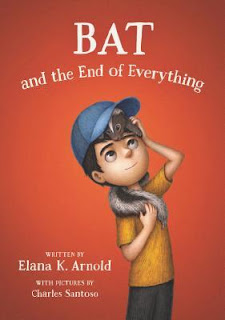 Bat and the End of Everything is the third volume in the adventures of Bixby Alexander "Bat" Tam, following A Boy Called Bat (2017), and Bat and the Waiting Game (2018). It picks up essentially where Waiting Game left off, with Bat about to finish the third grade, and still caring for Thor, the orphaned skunk kit. He's full of concerns, ranging from who is going to care for the class pet, Babycakes the rabbit, to the fact that his best friend, Israel, will be spending much of the summer in Canada. And underneath it all is Bat's greatest worry -- the need to release Thor back into the wild soon, even though Bat doesn't want Thor to go.

What holds End of Everything together is the strength of its characterization. Bat remains one of the most carefully detailed characters with autism in children's literature, and his family and friends also seem poised to walk of the page at any moment. Both the conflicts and the solutions to those conflicts arise organically from who the characters are; nothing feels forced or arbitrary. This, at least in my opinion, is the most distinguished feature, not only of End of Everything, but of the Bat series as a whole.

The ending is awfully sunny, and I suppose it's possible to complain that it steps around some of the issues that have previously been raised in the story. I thought it was prepared and foreshadowed enough that it was perfectly effective, as well as fitting in with the general tone of the series, which is suffused with optimism and love. End of Everything is a bighearted book, one unafraid to conclude with the novelistic equivalent of a group hug.

I'd be surprised if the third installment of this series was where the Newbery committee decided to recognize it. Indeed, series for younger chapter book readers include some of the best-loved books in American children's literature, but for whatever reason, they don't tend to do well in the Newbery race; we cherish Ramona, Homer Price, Ruby Lu, Clementine, and Ivy and Bean, but none of them have ever taken the gold medal. Regardless, End of Everything is cozy and lovely, and anyone who's followed Bat's adventures this far won't be disappointed.