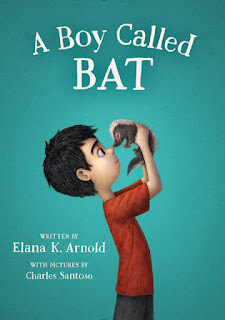 A Boy Called Bat is the latest title from Walden Pond Press, who are longtime friends of For Those About to Mock. They asked me if I'd be interested in participating in the blog tour for this book, and of course, I said yes.

As I was reading A Boy Called Bat, I asked Rachael about children's books with well-written and well-developed autistic characters. I mentioned The Real Boy, and Rachael volunteered Rain Reign. To this list, I think we can definitely add A Boy Called Bat, whose titular protagonist rings more than a little true.

Bixby Alexander Tam, whom everyone calls Bat, is an autistic boy who loves animals. His mother is a veterinarian, and when she comes home with an orphaned baby skunk, Bat immediately forms a bond with the animal. The plan is to turn the skunk over to a wild-animal shelter in a month, but Bat wants to find a way to convince his mom to let the skunk stay.

My favorite thing about A Boy Called Bat was the interaction between the members of Bat's family. Bat's love/frustration relationship with his sister, Janie, the fierce love his mother has for him, and the way his divorced father fits into the picture are all deep and real. This is a book about a skunk, but it's really a book about a family learning to love and understand each other better.

I also appreciated the fact that the book is willing to end before all of the loose ends are wrapped up. The back cover says that sequels are planned, but A Boy Called Bat works fine as a stand-alone. I didn't feel like I was being left with unanswered questions; I more felt that an emotional conclusion had been reached, and the remaining plot threads were simply indicative of the fact that life doesn't usually wrap things up with a neat little bow.

It's still too early in the year for me to feel like I have a handle on the Newbery race, so I don't know how A Boy Called Bat will fare in it. I do think that there's a lot for the Schneider committee to like here, and I'm curious to see if they will choose to recognize this novel.