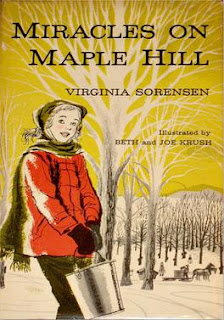 I'll confess: it took me a long time to get through Miracles on Maple Hill, Virginia's Sorensen's 1957 Newbery winner. Much, much longer than it should have taken to finish a breezy, episodic novel that clocks in at well under 200 pages.

Admittedly, books about the Magical Restorative Power of Country Living are a hard sell for this city kid. In Miracles, Marly, her older brother Joe, and her parents move from Pittsburgh to rural Pennsylvania, where Marly's mother once lived. Over time, this heals her family, provides her with a sense of genuine wonder, and even seems to completely cure her father's PTSD (which stems from his experiences in a POW camp, though it's never really explained what exactly happened to him, or even whether he served in WWII or Korea).

To be fair, a handful of my all-time favorite children's books are at least in part paeans to rural life (Twelve Kinds of Ice, Sarah, Plain and Tall), or feature characters whose lives are changed for the better after moving to the country (The Story Girl). But Twelve Kinds of Ice contains some of the most arresting prose I've ever read in a children's book, while Sarah, Plain and Tall and The Story Girl could be used in a master class on characterization. On the other hand, the prose in Miracles certainly has moments, but isn't consistently brilliant, and the characters often seemed one-note or flat to me -- the interactions between Marly and Joe, in particular, begin with a real grain of truth, but often seem to deteriorate into "girls and boys sure are different, aren't they?"

This last point feels like crux of the matter, because these kinds of loosely-plotted mid-century family novels live and die by the strength of their characters. When it works, you get Ramona Quimby, or Homer Price, or the Pye family. When it doesn't, there's a limit to how memorable the book can be, and I think that's a huge part of my problem with Miracles. It's not bad, but the lack of dimension to the main characters keeps the book from sticking in the mind, and even the avuncular Mr. Chris and the strangely dignified Harry the Hermit don't have enough depth to compensate.

Certainly, Miracles isn't the book from its publishing year that's best remembered; Newbery-eligible favorites from 1956 include Fred Gipson's tearjerker Old Yeller, Edward Eager's magical Knight's Castle, and Gene Zion's playful Harry the Dirty Dog, while non-eligible classics include English author Dodie Smith's The Hundred and One Dalmatians, and Irish-Englishman C.S. Lewis' final Narnia novel, The Last Battle. I don't think the selection of Miracles was indefensible -- to some extent, I mistrust my opinion of a book for which I may just be the wrong reader -- but I also doubt that it would win if we were to give out the 1957 award again.
Posted by Sam Eddington at 11:25 AM No comments: