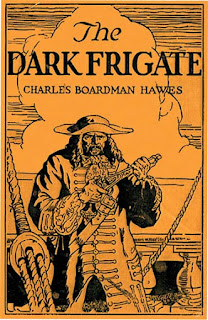 It's true that in March, we'll all be reviewing Newbery Winners from the 1930s. However, much like flappers, stockbrokers, and Calvin Coolidge, I'm not quite ready to leave the 1920s behind, and so I'm putting up a review of the 1924 winner, Charles Boardman Hawes' The Dark Frigate.

The Dark Frigate is a nautical yarn, the kind of book in which a fine young man -- Philip Marsham, our spirited protagonist -- accidentally falls in with a gang of scoundrels, and must take part in many thrilling adventures with them. This is the Robert Louis Stevenson formula, more than a little familiar from Treasure Island (1883) and Kidnapped (1886). Indeed, the pirates in The Dark Frigate are led by a charismatic antihero (Tom "The Old One" Jordan) who neatly fills the Long John Silver role, and the whole novel at times feels very much like a Stevenson pastiche.

It's also not as good as Stevenson; Philip Marsham is a colorless protagonist who's no Jim Hawkins or David Balfour, and few of the supporting characters can muster more than one personality trait. The nautical language is piled on so thick and heavy that for long stretches, the action is almost impossible to understand without a dictionary. And for a collection of notorious rogues, Tom Jordan's crew isn't actually all that good at their job; after they manage to take over Marsham's ship, the Rose of Devon, they don't accomplish much of anything for the rest of the novel.

Still, for all that it's a pale imitation of better books, The Dark Frigate isn't a terrible novel, especially by the (admittedly low) standards of 1920s American children's literature. The plot depends on some Dickensian coincidences, but is solidly constructed, and Hawes' obvious love for the nautical world invests the book with a measure of genuine charm. And -- although this is faint praise indeed -- I only counted one or two instances of obvious racism.

The Newbery eligibility criteria provide for a number of relatively unlikely circumstances, such as the author being a US citizen living abroad (e.g., at least at the time of her Newbery win, Sharon Creech); a foreign national living in the US (Neil Gaiman and Will James both fell into this category, although James' non-citizenship wasn't common knowledge at the time); and two or more authors co-writing a book (which, though it hasn't ever applied to the Newbery winner, has covered five Honor books over the years). Sadly, Charles Boardman Hawes remains the only beneficiary of the proviso that allows the award to be given posthumously; shortly after delivering the manuscript of The Dark Frigate to his publisher, he contracted pneumonic meningitis, and died before the novel was actually printed.

Even if sentimentality thus influenced the selection of The Dark Frigate as the Newbery winner, it was probably a solid choice; no Honor books were named for the 1924 award, and the only other "classic" title from the 1923 publishing year that I'm aware of is Bambi, a Life in the Woods, by the Austrian author Felix Salten.