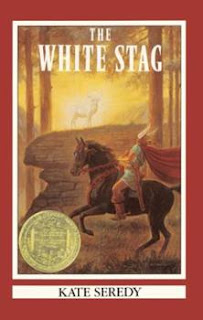 It occurred to me while reading The White Stag that it's possible to divide those early Newbery winners into two categories. On the one hand are books that, while they'd no doubt be written differently today (and, in most cases, with a greater eye toward sensitivity on racial matters), could, on a conceptual level, pass muster with modern editors, publishers, and readers. It requires no great leap of imagination to imagine a 2021 debut, for instance, for a The Story of Mankind-style overview of world history, or a book like The Voyages of Doctor Doolittle that featured a child's adventures with a doctor who could talk to animals, or a Thimble Summer sort of novel about a child growing up in Wisconsin during the Great Depression.
On the other hand, there are books that I can't imagine a present-day author even attempting, or a publishing house in 2021 trying to put out. Who would try their hand at a piece of squirmily Orientalized glurge like The Cat Who Went to Heaven these days, or dare to make up a bunch of "Chinese folktales" like the ones that fill the pages of Shen of the Sea?

The White Stag, Kate Seredy's 1938 winner, seems to me to fall firmly into the second camp. The book is a retelling of the legend of the Huns, as they sweep inexorably across Asia and eastern Europe, on their way toward claiming their Promised Land of Hungary. They wait expectantly for the arrival of their own Joshua figure, Attila, and experience both the rewards and the wrath of their deity, Hadur (generally speaking -- the theology of the book is honestly kind of confused). All of this requires them to battle and destroy any number of other people, whose crime is essentially Being In The Way. Seredy clucks her tongue in the direction of the Huns for this, but with a level of indignation more suited to disputing a parking ticket  -- she generally seems to regard the whole affair as just One of Those Things.

Maybe I'm wrong -- maybe there's a way to retell a myth like this so that modern children could find a path into the story. There are, of course, still volumes that retell Greek and Roman mythology for children, and those stories are also remote and violent. I think it would require a totally different approach than the one The White Stag takes, however -- one that doesn't frame the events as an adventure story designed "to pay homage to a race of brave men, men whose faith in their own destiny had led them to a land they still call their own."

Honestly, it's not that great of an adventure story either -- the characters are completely flat, the setting is underutilized, and the overall plot arc doesn't have the slightest hint of suspense. Seredy does have a feel for the heightened language of myth, and the sentence-level prose is easily the best thing about the book. That language is doubly impressive when one realizes that Seredy, a native of Hungary, didn't even speak English until she was an adult -- and thought of herself more as an illustrator than an author (she would win a Caldecott Honor in 1945 for her illustrations for The Christmas Anna Angel). If I had to guess, I'd bet that it was the sparkling wordsmithing that attracted the attention of the Newbery Committee.
A lack of competition may also have helped. The committee named three honor books, the best known of which is On the Banks of Plum Creek, number four in Laura Ingalls Wilder's Little House series. Otherwise, the most famous American book of the year is probably And to Think That I Saw It on Mulberry Street, Dr. Seuss's first children's book (and one of the ones that the publisher just withdrew for containing offensive imagery). J.R.R. Tolkein's The Hobbit looms the largest of the children's books that came out in 1937, but it of course wasn't eligible for the Newbery. And so, The White Stag took the gold medal, though even among winners of the 1930s, it remains one of the more obscure choices.
Posted by Sam Eddington at 9:40 AM No comments: