The Winner's Circle: The Cat Who Went to Heaven, by Elizabeth Coatsworth (1931) 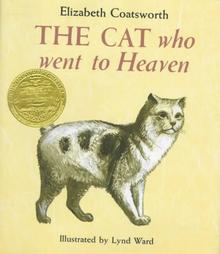 In the 1920s and '30s, American literature went through a period of fascination with east Asia. The most prominent author of this trend was Pearl S. Buck, who picked up a Pulitzer in 1932 and a surprise Nobel Prize in 1938. Buck, of course, wrote primarily for adults, but plenty of children's authors worked the same vein. Three of them managed to pick up the Newbery for their efforts: Arthur Bowie Chrisman, for Shen of the Sea (1926); Elizabeth Foreman Lewis, for Young Fu of the Upper Yangtze (1933); and Elizabeth Coatsworth, for today's subject, The Cat Who Went to Heaven (1931).

American literature long ago went in a much different direction. By the time I was in college as an English major in the late '90s / early '00s, Buck was essentially a footnote; we never read any of her work, and the only time she was even mentioned was as one of the most egregious mistakes made by the Nobel committee. The children's authors have fared even worse: Chrisman is almost forgotten now, and though Lewis won the Lewis Carroll Shelf Award in 1960, both she and Coatsworth are considered minor figures in American children's literature, known mostly to specialists in the field.

Indeed, I'll confess that, despite the fact that she published over ninety books in a career that spanned nearly half a century, I've never read any of Elizabeth Coatsworth's other titles. As such, I don't feel qualified to pass judgment on her career as a whole, other than to note that the vast majority of the books she published are out of print. However, I do feel that I can say that, if The Cat Who Went to Heaven is a neglected Newbery these days, it's not without reason.

Set "once upon a time" in Japan, The Cat Who Went to Heaven tells the story of a nameless artist and his (also nameless) housekeeper, who adopt a cat, which they name Good Fortune. The artist has been very much down on his luck, but he soon receives a commission from the priest of the local temple to produce a painting of the death of the Buddha. This tableau includes all of the animals except the cat, who, legend has it, rejected the Buddha's teachings. However, this omission seems to depress Good Fortune, which leads the artist to relent and include the cat in the painting anyway, which leads to Good Fortune's death (from joy!), and the (literally) miraculous ending. (The ending, by the way, led Rachael to exclaim "That's not a Newbery book, that's an e-mail forward!")

It's tough going for a modern reader. The overly exoticized Orientalism and weepy sentimentality are serious turn-offs, especially in the ending. The housekeeper periodically breaks into awkward songs in which she praises her master and expresses her intense desire to serve him; the power and gender dynamic at work here is uncomfortable at best. Simply put, it's a book whose whole sensibility seems very dated, far more so than many much earlier American children's classics such as Little Women (1868-69), Adventures of Huckleberry Finn (1884), or even The Velveteen Rabbit (1922). For a child today, it could just as easily have come from the moon as anywhere else.

I didn't put The Cat Who Went to Heaven on my list of obvious Newbery mistakes because there just weren't a lot of options for the 1931 award. Although a record eight Honor books were named, it's a depressing list that mostly goes to show that the powers that be were willing to fetishize pretty much any kind of exoticism: Floating Island, The Dark Star of Itza: The Story of a Pagan Princess, Queer Person, Mountains are Free, Spice and the Devil's Cave, Meggy MacIntosh, Garram the Hunter: A Boy of the Hill Tribes, and Ood-Le-Uk the Wanderer. I couldn't find any other classic books that went unhonored, though I could have missed something.

So was it a mistake? Eh, probably not. But is it worth reading? Not at all, unless you've got a thing for outdated 1930s books, or you're a Newbery completist.
Posted by Sam Eddington at 3:29 PM