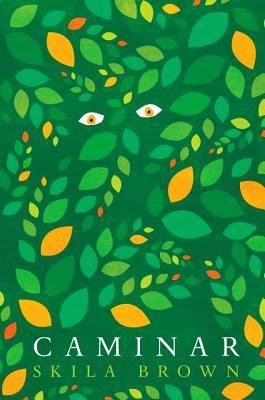 Now that's how it's done.

Caminar is a verse novel about a boy named Carlos, who lives in Guatemala during that country's interminable civil war. When his sleepy village suddenly flashes into violence, Carlos is cut off from everyone he has known and loved, and struggling, not just with survival, but with what it means to truly be an adult.

It's not a secret around this blog that I don't like verse novels. However, Skila Brown demonstrates a clear, effective understanding of the poetic aspects of the form -- her line breaks are purposeful, her typographical choices are effective, and her metaphors are inventive. The verse novel form allows Brown to explore a larger conflict through a series of perfectly-delineated moments. This is the verse novel as it was meant to be written and experienced.

Frankly, Caminar is so polished and assured that it's hard for me to believe that it's actually Brown's first book. I try to shy away from making these kinds of pronouncements, but Caminar sure looks to me like the arrival of an important new voice in children's literature. It never talks down to its audience, even when the subject matter is nuanced and difficult. Carlos is a believable, conflicted hero, and the other characters are also well-described and three-dimensional -- a place where many verse novels run into trouble.The themes are also expertly woven into the narrative, especially the bits about the nahuales, the animal spirit guides that bring protection and insight.

One could complain that the epilogue isn't really necessary, though I think it helps to bring the narrative full circle. But otherwise, I can't find much to complain about in Caminar. It's smart, precise, and vivid, and I expect to be talking about it a lot more during the rest of the year.


Publication in March through Candlewick
Posted by Sam Eddington at 2:46 PM