2013 Contenders: Glory Be, by Augusta Scattergood 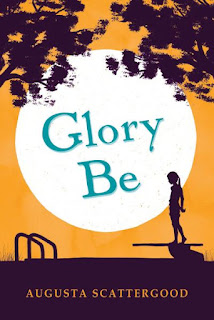 In fact, I start to wonder if what we have here
is really two poems, or three, or four,
or possibly none.
~Billy Collins, "Workshop"

The passage in Glory Be that most helped me make sense of how I felt about it isn't in the body of the novel at all, but rather buried towards the end of the Author's Note that serves as a postscript.

"I once thought this book was about sisters, how they grow apart and come back together. Then smart, important people showed me it was about more than sisters."

With the highest due respect for people who are probably smarter, and without a doubt more important than me, I think that maybe Augusta Scattergood should have stuck with her initial impulse. Glory Be tells the story of Glory Hemphill and her older sister Jesslyn, and the tumultuous summer of 1964, in which issues of segregation and racial equality come tearing through the sleepy town of Hanging Moss, Mississippi. However, the parts about the sisters' changing, uneasy relationship ring to me much truer -- and seem to me more profound -- than the portions that try to deal with the impact of the Civil Rights movement on a racially divided town.

Glory and Jesslyn's story is tenderly drawn, and laced with details such as the importance of the game of "junk poker," a card game in which the kinds of treasures that are special to children are used as chips -- a game that Jesslyn invented, but which she now considers herself too old to play. The Civil Rights sections, however, too often trade in stock tropes such as the unidimensional town football star/bully and the plucky, undaunted librarian.

I had two main issues with this book, and I think both of them stem from trying to graft "more than sisters" onto the story. One has to do with the subplot involving Jesslyn's relationship with Robbie, a youth who is living with his aunt in Hanging Moss after being arrested in North Carolina for participating in a sit-in. Once Glory accidentally reveals Robbie's backstory, the town bully and his friends beat Robbie up, after which he decides to leave town and does so. And...that's it. The ending to this plot seemed so abrupt that I spent the last twenty pages of the book waiting for there to be more to it, especially in its impact on Jesslyn. Maybe that absence is because Glory, not Jesslyn, is the narrator of the book -- and we do get a scene of her trying to atone to Jesslyn for her mistake -- but it still seemed unfinished to me.

The other involves Glory's Letter to the Editor about the closing of the community pool, which closing is motivated by the desire of the white residents not to be forced to swim with the black residents. I simply wasn't able to buy that it was written by a child. I've known a lot of eleven-year-olds in my life, including some that were very intelligent indeed, and I don't think any of them could produce a document with that level of rhetorical sophistication. Indeed, there's no other point in the narrative when Glory herself shows that kind of grasp of linguistic strategy. It took me completely out of the story -- and I'm not convinced that it's really an integral part of the story even if it were written more realistically.

Glory Be is by no means a poor book, and given that it's Scattergood's debut, I'd mark her as an author to watch. I just wish I could have read a book that spent all of its energy in its incisive exploration of sisterly relationships, rather than diffusing itself trying to do too much.