2013 Contenders: The False Prince, by Jennifer A. Nielsen 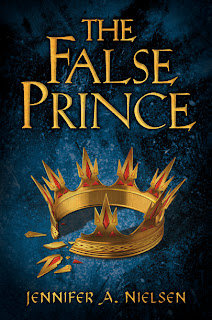 Sage is a smart-mouthed, street-smart orphan in an imaginary pseudo-medieval kingdom on the brink of civil war. He is picked up, along with three other orphan boys, by a mysterious nobleman with a risky political scheme in mind. The success or failure of the plan could decide the fate of the kingdom.

As I read The False Prince, I kept remembering something Vicky Smith said during the Morris Seminar. When Gregor the Overlander* came out, she hated it, and she ranted extensively to a colleague about its derivative, predictable plot. The colleague gently reminded her that derivative, predictable plots can be great training wheels for readers who are new to the conventions of fiction.

That kind of thing can be easy to forget.

As librarians and reviewers, we've read it before. We've read it ALL before. In this case, I had read Megan Whalen Turner before, and so I predicted the plot twist of The False Prince about twenty pages in. But this book is targeting a slightly younger audience than Turner's, so they're probably not expecting every orphan to turn out to be... well. Let's just say they have fewer expectations. And reading something like The False Prince does teach them how complicated plots work, and prepares them to take on The Thief. It's also suspenseful, fast-paced, and full of action and humor - all qualities that appeal to middle-grade readers, which encourages them to read more, which creates lifelong readers, which is, after all, what we're trying to do.

So, yes. Please booktalk and recommend The False Prince! Your readers, both boys and girls, will like it very much. Heck, I enjoyed it (in spite of) myself. But it's not breaking any new ground, and though it is deftly plotted** and features some interesting characters, I think it's ultimately too derivative to be a serious Newbery contender.

*I happen to love that book. It plays to my sympathies as a reader, with interesting concepts, atmosphere, and settings. The scene where the cockroaches worship the toddler with the poopy diaper is worth the price of admission. But "what kind of reader are you" is a question for another post.

**Though if I were really going to pick it apart, I might point out that it's hard for a first-person narrator to hide a huge secret about himself without some implausible omissions. Megan Whalen Turner pulls it off, but she is God.
Posted by Rachael Vilmar at 3:19 PM