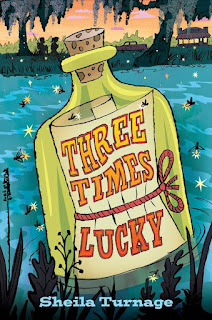 Three Times Lucky reads like a soap opera, and I mean that in the nicest possible way. It's a novel unafraid to go completely over the top, and one has to admire its courage. An orphan washed up in a hurricane, miraculously unharmed? Check. An eccentric man who can't remember his life before a car crash? Check. Kidnapping, robbery, blackmail, murder? Check, check, check, and check.

The result is a book that's almost compulsively readable. The pacing is excellent, and I found it difficult to put down. It was wild, crazy, thrilling, and any number of other book-jacket adjectives. I'm not generally all that interested in small-town books with an ensemble cast of "quirky" characters, but this one grabbed me and didn't let go, despite my reservations about such things.

The last chapter was a bit Now We're Going To Wrap Up All The Loose Ends for me, but I suppose by that point, the reader is just about ready to finally get all the answers. According to her blog, Sheila Turnage has a sequel set for publication next year, and I'm curious to see where she goes with these characters now that many of them (though not, interestingly, the heroine, Mo) have their mysterious backstories revealed.

I had one serious reservation about this book. It's set in a Tupelo Landing, which, though it's fictional, can be placed with some accuracy on a map of North Carolina, roughly between Winston-Salem and Greensboro. And yet, as far as I can tell, the only non-white character is Mr. Li, the karate instructor, who's a very minor figure in the book. I could possibly have missed something, but unless I did, this is a book set in small-town east-central North Carolina that doesn't have a single African-American character in it -- something so unlikely as to stagger the imagination. I noticed this on several occasions, and it stuck out like the proverbial sore thumb.

At any rate though, this is a good book, and one that I expect will attract kids. It's getting excellent reviews from other sources, and I'd keep my eye on it as the year goes on.

Publication in May through Dial Books for Young Readers / Penguin
Posted by Sam Eddington at 8:01 AM