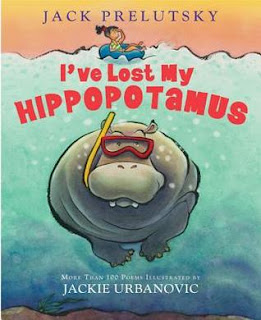 I'm always interested in the way that awards committees of any kind come to interpret their own rules. There are the rules as they are written, yes, but there are also the conventions and tendencies that aren't written down, though they're followed so closely that they might as well be.

The Newbery terms plainly state "There are no limitations as to the character of the book considered except that it be original work." Definition 1 adds, "the committee shall consider all forms of writing—fiction, non-fiction, and poetry."

However, in practice, poetry has gotten something of a short shrift. In the Newbery's 91-year history, poetry has won exactly twice: A Visit to William Blake's Inn, by Nancy Willard, in 1982, and Joyful Noise: Poems for Two Voices, by Sid Fleischman, in 1989**. It hasn't done much better in the Honors; aside from the recent Dark Emperor and Other Poems of the Night, by Joyce Sidman (2011), it's hard to find an Honored volume of poetry that isn't something else too, such as a biography (Carver: A Life in Poems, by Marilyn Nelson, 2002), novel/narrative (Inside Out & Back Again, by Thanhha Lai, 2012; The Surrender Tree: Poems of Cuba's Struggle for Freedom, by Margarita Engle, 2009), or...um...alphabet book (The ABC Bunny, Wanda Gág, 1934).

But the situation becomes even more stark when one considers humorous poetry. American children's literature has produced some truly classic volumes of humorous poetry -- think Where the Sidewalk Ends, or The New Kid on the Block, or Sad Underwear and Other Complications. However, none of these books has ever so much as Honored. None. Never. No matter how "distinguished" a volume of humorous poetry may be, according to the tradition of the Newbery committees, it Just Doesn't Count.

I thought about this a lot while reading I've Lost My Hippopotamus. I loved Jack Prelutsky's work when I was a child, and so I was excited to check this new book of his out. It doesn't really break any new ground for him, but that doesn't mean it isn't entertaining and inventive. As a lover of portmanteaus (portmanteaux?), I enjoyed Prelutsky's heavy use of them in this volume -- some of my favorites were in the poems "A Dozen Buffalocusts," "Flamingoats," and "The Halibutterflies." I also appreciate the fact that Prelutsky respects the intelligence of his readers. He uses the right word for the circumstance, regardless of whether it's a word a child is likely to know at first sight, trusting that the reader will be smart enough to either determine the meaning from context, or go to a dictionary and look it up. Peregrinate, ineluctable, jocosity, dulcet, kudu -- on and on like that, but always the right word at the right time, used to be appropriate and funny, rather than as some kind of vocabulary-building exercise. I think that's something many children will respect.

I'm not sold on Jackie Urbanovic's illustrations, which seem messy and cluttered to me, and which I think will have limited child appeal. And the book does include a few clunkers in and around the entertaining poems -- it's not a perfect collection. But the excellent pieces outnumber the bad ones, and given that none of the poems extend beyond a two-page illustrated spread, it's easy just to let the momentum of the book carry you on to the next poem. My overall impression was very much a positive one.

At any rate, this won't win anything, or even be seriously considered. But I think the fact that I can say this with perfect confidence is a shame. A lot of crimes against verse are committed in the name of humorous poetry, true, but the best of it isn't any less "distinguished" than the best of any other genre, and it's too bad that the Newbery hasn't ever recognized any of these works.

Publication in March through HarperCollins Children's.


**I'm not counting Out of the Dust (1998), Karen Hesse's winning verse novel. If you want to count it, you can raise the number to three.
Posted by Sam Eddington at 9:50 AM