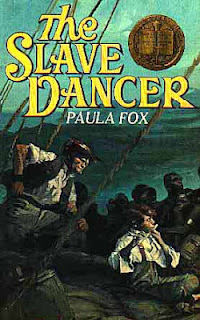 "It pretty much just borrows the ending from Moby Dick," I said.

"Don't tell me! I don't know yet how Moby Dick ends," was Rachael's answer.

"No, although I get the feeling they don't catch the whale."

So...um...consider this your spoiler alert, Rachael?

To go back to Moby Dick for just a moment, the reason that book ends the way it does is that there isn't any other way it can end. Captain Ahab's monomania has so consumed him that he's quite willing to sacrifice anything, everything, up to and including his ship, his own life, and the lives of everyone depending on him for one more shot at the white whale -- and no one is willing to step in and really stop him. It's a direct result of the way the entire book has been plotted. No other ending would suffice.

On the other hand, there isn't any particular reason The Slave Dancer needs to come to a similar dénouement. The slave ship on which Jessie has been impressed is almost home, they're spotted by an American vessel and have to flee -- and toss the slaves overboard -- and then suddenly a huge storm sweeps up, kills everyone else on board, and then sinks the ship. It's a deus ex cumulonimbus that saves the author the trouble of having to deal with the rest of the characters. You could make the argument, I suppose, that it's the result of the Captain's having trusted Benjamin Stout, who misidentifies the American ship as English until it's too late, but I don't think it flows all that organically from the rest of the book.

But then again, I don't think the book has a plot, so much as it has a series of events that happen in sequence. The passages that deal with Jessie having to play his fife for the slaves to dance, and the descriptions of the horrific conditions of the Middle Passage are certainly powerful, but they're not connected to a story of particular interest. Jessie doesn't have the resourcefulness or personality of a Jim Hawkins, and most of the crewmembers who aren't Purvis and Stout blend into each other. Ras also doesn't emerge into an important character until he's almost out of the book, and the part where he and Jessie are rescued by an escaped slave named Daniel seems rushed and forced, a coda that happens for no reason other than that Jessie has to get back to New Orleans somehow. The book does cover Big Issues, important issues, but it's not much of a novel, really.

It would be one thing if 1974 had been a weak year, but in fact, it was more than a little crowded. That year's committee somehow only selected one honor book -- Susan Cooper's The Dark is Rising, and gave nothing to Socks, by Beverly Cleary; Summer of My German Soldier, by Bette Greene; A Day No Pigs Would Die, by Richard Peck; and The House with a Clock in its Walls, by John Bellairs. (Interestingly, Cooper, Cleary, and Peck would later end up winning the Newbery for other books, and Greene was given an Honor the very next year.) You could argue that The Slave Dancer grapples with the weightiest subject matter out of that group, but when one evaluates a book based purely on its message and neglects the artfulness of execution, one ends up making mistakes. Like, for instance, giving The Slave Dancer a Newbery.
Posted by Sam Eddington at 11:08 AM