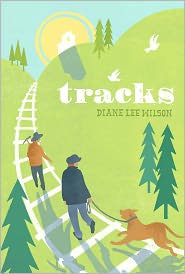 The completion of the Transcontinental Railroad was one of the most important events in American history, but it's not one that has a particularly prominent place in the national psyche. One way in which this can be seen is the relative dearth of books that use that setting. It's refreshing to see a children's book make use of this chapter in history, and so I was excited to start reading Diane Lee Wilson's Tracks, which follows a youth named Malachy as he labors laying the rails.

However, I'll be honest and say that I found the book disappointing. The plot was too episodic to generate any momentum; for much of the book, it felt like it was simply ticking off historical events (an avalanche that killed several Chinese workers, the setting of the record for most track laid in a day, the events at the Maiden's Grave) without using them in the service of the overarching narrative. Malachy is reasonably well-defined, and Ducks isn't completely flat, but the other characters in the book rarely have more than one personality trait.

I also felt like the book's anti-racism message was very heavy-handed. The themes of discrimination against the Irish, and to a much greater extent, against the Chinese, seemed to me to be told much more than shown -- especially since so much of it was voiced by characters of little depth. It's perfectly possible to write an excellent novel that says something about problematic race relations -- think To Kill a Mockingbird, or The Astonishing Life of Octavian Nothing, Traitor to the Nation, or One Crazy Summer. But the reasons those books work is that we care about the characters, and they are involved in a story that is interesting as a story.

Now, it's important to recognize one's own biases, and I know, as a reviewer, that I'm very sensitive, maybe oversensitive, to didacticism. But I believe that, in terms of art, to simply possess a valuable or noble message isn't enough to make a work great, or even good. Plenty of terrible art espouses wonderful values. Great art requires one to work one's values into a compelling story, beautiful prose, nuanced characters -- something larger than a simple declaration of belief. And that is where, in my opinion, Tracks doesn't succeed.

Tracks is being championed by Richie Partington, among others, so feel free to disagree with me. But I wasn't a fan, and I don't see it finding a place on my short list.

Publication is in April through Margaret K. McElderry/Simon & Schuster.
Posted by Sam Eddington at 10:53 AM