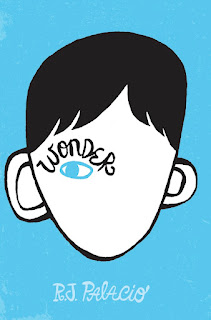 "Be kind, for everyone you meet is fighting a hard battle," said someone or other (probably Ian McLaren and not Plato.) Whoever put them together, those words kept coming to mind as I read Wonder - and not only for the most obvious reason.

Clearly, Auggie (August) Pullman is fighting a battle. His facial deformities and their associated medical complications have kept him out of school for the first ten years of his life. As the novel opens, he is set to enter fifth grade at a small private school in New York. This is a recipe for disaster, both interpersonal and literary. As many reviewers have noted, it's not easy to write a "kid with a conspicuous medical problem" novel and have it turn out anything but lurid or preachy.

Part of what keeps Wonder from that fate is the broadness and universality of its themes. At first, we see the world through Auggie's eyes - we are immersed in his battles. Then the perspective shifts, and we are in the head of his older sister, Via. Then Auggie's schoolmate, Jack. Then several other characters. With each one, we become aware that though Auggie's problems are the most conspicuous ones, he's not the only one struggling. Everyone is fighting a hard battle. Kindness given and received; courage in the face of social pressure - these themes are woven so tightly into the fabric of the book that it transcends the "problem novel" genre and becomes, like the very best books, a meditation on the nature of humanity.

That makes it sound heavier than it is, though. Palacio makes her point with humor, Magnetic Fields lyrics, and an impressively light touch. Short chapters, direct language, and skillful pacing make the book seem much shorter than its 320 pages. And the dialogue and social interactions ring true. I've taught fifth graders - in a private school, at that - and this is how they talk. This is how they act. It is also, without giving too much away, the way certain private school parents act.

Some people will say that the resolution is too neat, but I think it's appropriate for a middle-grade novel. I think the turning of the social tide is believable, and I think Auggie and Palacio earn their happy endings.

It's early in the year still, but this is at the very top of my Newbery list so far.

Posted by Rachael Vilmar at 4:32 PM