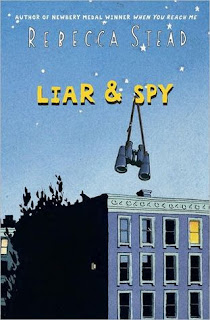 One of the first things I said to Rachael after picking up Liar & Spy was, "You know, I don't think you could mistake a Rebecca Stead novel for one by anyone else." Few children's authors working today have as distinctive a voice and tone. She combines a deep fondness for her urban NYC settings with a keen observational eye, a sense of mystery, and a spare prose style with an intense respect for white space. It's equal parts Emily Cheney Neville, Brian Selznick, and Ernest Hemingway, and it's utterly lovely.

Liar & Spy is the story of Georges, a seventh-grader who's been forced to move out of his childhood home and into an apartment building a few blocks away. There he meets Safer, an unusual boy who runs the Spy Club, and Candy, Safer's precocious sister. The building seems to be full of secrets, and Georges' story becomes more and more intertwined with those secrets. And does Georges have secrets of his own as well?

It's a complex story, told with exceptional skill and craft. Georges is a believable protagonist, and many of the minor characters are some of the most well-rounded that you'll see in a children's novel. The themes and images are rich enough to serve as subject matter for any number of college-level litcrit essays.

The only problem, if you want to call it that, is that the bar for Rebecca Stead novels is set almost impossibly high. I would opine that When You Reach Me was as close to a perfect book as children's literature has produced in at least the last decade, and Liar & Spy, for all its merits, isn't a perfect book. An astute reader could likely guess one of the main plot twists almost 100 pages before it happens. The book has one of those scenes where everyone gets together and hatches a plan...except that the reader doesn't get to know what the plan is, for no narrative reason other than to artificially induce some suspense. And readers with a real love of plot-driven action are much more likely to be dissatisfied by Liar & Spy than by its predecessor.

I don't think any of these are major problems; they're no more than the differences between a book that's a stone-cold classic (#11 in Betsy Bird's most recent top children's novels poll) and one that's merely very good. But I do believe that, in the competitive climate of 2012/13, they might be enough to keep Liar & Spy off the Newbery list (although I feel confident that it will make the Notables).

So no, I don't think Rebecca Stead is going to make it two Newbery-winning books in a row. What I do think is that Stead is one of the most important American children's authors currently writing, and that when she puts out her next book, I'll be first in line to read it.
Posted by Sam Eddington at 9:44 AM