2013 Contenders: A Black Hole Is Not a Hole, by Carolyn Cinami DeCristofano 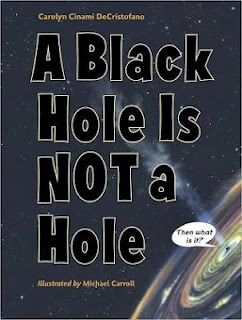 It's not the only -- or even the primary -- criterion that I use when evaluating children's books, but I get a special thrill when I see a book and think "You know, I would really have enjoyed this book as a child." A Black Hole Is Not a Hole gave me that feeling, reminding me of the first time I picked up Our Universe or The Cartoon Guide to Physics, a pair of books that loom large in my memories of growing up.

Carolyn Cinami DeCristofano's book does an excellent job of taking a difficult concept and making it accessible for younger readers. Her prose is full of funny turns of phrase ("The plasma rolls and churns like a hyper hurricane of heat, light, sound, and motion."), and she has a way of making even difficult thought experiments easily comprehensible.

The only real issue that I had involves the order in which some of the information is presented. The book starts out using Newtonian physics, and only towards the end introduces relativistic principles. The part where relativity is introduced talks about the relationship between Newtonian and relativistic frameworks, but the initial explanation of Newtonian mechanics doesn't mention that relativity will be coming. The result is that a child reader learns one explanation for what happens in a black hole, only to learn later on in the book that there's another, better explanation. As someone with a lifelong interest, if no post-high school education, in physics, I'm all for teaching both Newtonian mechanics and relativity, but I think talking about one without telling the reader that the other is coming might confuse a child.

That's not a huge point, and the rest of the book is excellent. I don't think it's a serious Newbery contender in the same way that something like Moonbird is -- it's educational and beautiful, but it doesn't transcend its subject like Moonbird does. It is, however, very good, and I'd recommend it to any child with an interest in science or space.


Published by Charlesbridge, and out now.
Posted by Sam Eddington at 9:23 AM