2013 Contenders: Starry River of the Sky, by Grace Lin 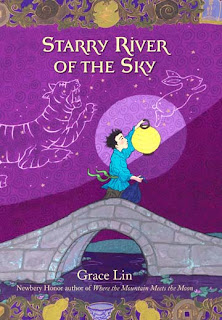 Where the Mountain Meets the Moon is an excellent book. Grace Lin basically used it to invent a new genre, or at least bring an existing genre to a new audience. Seriously - I've been thinking about this a lot, and I can't think of any other Juvenile Folktale Fantasy novels. There's Adam Gidwitz's work and there's Breadcrumbs, but in both of those cases all of the action takes place within the tales themselves. There are Cat Valente's Orphan's Tales, but those are (very much) for adults. There's American Born Chinese, but that's a graphic novel for teens. I can't name any other children's novelists who are using Lin's intricate structure of tales within tales, all of which eventually converge both thematically and narratively.

Where the Mountain Meets the Moon also happened to be published in 2010, the same year that When You Reach Me was the biggest Newbery shoo-in of the millennium so far. Hence, Mountain (or "Dragon and Minli," as my daughter calls it) earned a well-deserved Honor, but no gold medal.

With Starry River of the Sky, Lin continues to refine her fledgling genre. It takes place in the same universe as Mountain, with some of the same characters, but it's very much a companion book and not a sequel. As the novel opens, we are plunged into the midst of a mystery. A boy named Rendi has run away from home, and he finds himself stranded in the remote Village of Clear Sky. The reader initially knows nothing about Rendi or about the village's odd inhabitants, partly because both the boy and the village are trying their best to forget about the past. As in Mountain, though, the only way forward is to go back - to piece together the truth from scattered fragments of Story.

As a storyteller myself, I'm pretty receptive to the idea that we are healed by stories. Preacher, meet choir.

There is a quality of timeless elegance about Grace Lin's prose. It reminds me of a very different series of books - The Penderwicks - in that it is suffused with that ineffable "classic" feel. That's a difficult style to pull off without sounding precious or forced, but Grace Lin accomplishes it quite... gracefully (sorry). In terms of setting and character, it's difficult to compare Starry River of the Sky to other juvenile fiction books, because both of those elements are marked by the stylistic remoteness of of the traditional tale. That's not a critique, but it does make it harder to compare Starry River to something like Liar and Spy. They're just not trying to accomplish the same things. Plot, theme, and the intersection thereof, however, are indubitably distinguished.

I have only two complaints:

2. My ARC doesn't have the full-color art that will grace (sorry! again!) the pages of the published book.

Publication in October through Little, Brown.