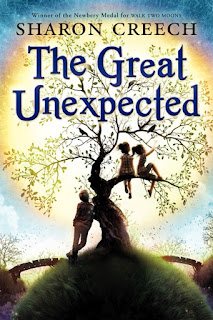 The Great Unexpected is one of those books that defies a plot summary. It's centered around two orphan girls, Naomi Deane and Lizzie Scatterding, who live in the small town of Blackbird Tree, but the story incorporates a vast number of other characters, and reaches far past the town limits. There are plots, and sub-plots, and it's the way that they intertwine that forms the heart of the book.

Indeed, it would probably be 500 pages, rather than 225, if it explained all of the details of each subplot; there is much that remains unsaid. In a gritty, down-to-earth book, this would be irritating, but in the magical realism world of The Great Unexpected, it merely highlights the importance of connections, rather than the details. If we're left with questions about the exact arcs taken by some of the characters as they come together, we're never left to doubt that they have come together, and that that's what actually matters.

That atmosphere, that mood of magic and wonder and community, is remarkably well-executed, and represents I think the book's strongest point. The weakest part is possibly the narrative strategy. Most of the book is told in the first person with Naomi as the narrator, which works very well; she has a strong, distinctive voice. However, it's interspersed with bits of third-person narration, most of which take place in Ireland. I felt like this disrupted the flow of the book, especially given the way those sections are cut. There's no physical narrator, no character who is, for instance, overhearing something, which means that there's no narrative reason within the story for those sections to begin or end in a specific place. Yet they tend to cut out just before some important piece of information is revealed; since the information isn't secret to the people who are talking, and the scene can run as long as the author wants it to, to omit the information is simply to try to create suspense artificially. If suspense is necessary, I believe it's more effective to stay within the point of view of a character who actually doesn't know what's going on -- that way, it's more organic, and less of a trick.

All this maybe makes the book sound weaker than it is. In fact, I genuinely enjoyed it, and I'm not generally predisposed to like books about orphans and small towns and hints of magic. I especially liked the ending, which both provides upbeat resolution and leaves so much open.

Truth be told, I could see the Newbery committee looking favorably on this one; it's so exceptional in the way that it creates and maintains a tone, and it explores themes that have traditionally had a lot of resonance for the selection committees through the years. It wouldn't be my pick, but especially if you value thematic unity over narrative consistency, you might well disagree with me.