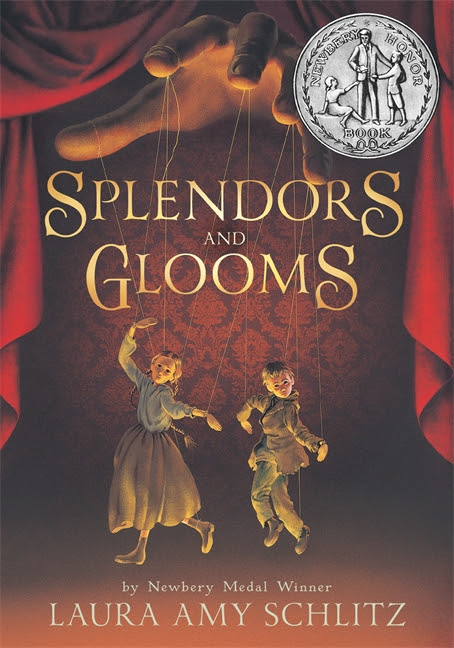 I've been having the darnedest time figuring out how to review Splendors and Glooms. I first read it back in June, I think. I gave it five stars on Goodreads, mentally filed it away as My Favorite Book So Far This Year, and planned to reread and review it later. I reread it this month - still great.

Here's the thing, though: I'm kind of a fangirl for Laura Amy Schlitz. She is by far my favorite author writing for children right now. I find that it can be difficult, however, to explain her genius to those who are not already on her bandwagon. I firmly believe that A Drowned Maiden's Hair should have won the 2007 Newbery, and I know some people love it as much as I do, but many reviews dismissed it as formulaic.

But. BUT. Therein lies Schlitz's particular talent: she takes what should be formulaic and infuses it with beauty and emotional depth. A Drowned Maiden's Hair follows the plot of a traditional melodrama, but it says True Things about love, family, and home. Similarly, The Night Fairy (another wildly underrated book) contributed a wonderfully fierce, complex character to the overstuffed ranks of fairy lit, and accomplished that within the confines of a book directed at lower elementary readers. Like a formal poet, Schlitz employs the limitations of genre to lend depth and focus to her books.

And so we come to Splendors and Glooms. Typical Victoriana with the addition of magic and marionettes. Poor little rich girl Clara Wintermute is both coddled and stifled by her parents. The long shadow of family tragedy hangs over her household and continues to shape her life. Enter plucky orphans Lizzie Rose and Parsefall, apprentices/slaves to the sinister puppeteer Gaspare Grisini, who lives under a shadow of his own. And then there is the mysterious witch with the cursed opal pendant. The three worlds collide in comic, tragic, sensational ways that make the novel's 400 pages fly by.

Seen it before? Of course! But not like this. I would argue that Clara, Lizzie Rose, and Parsefall are the most fully realized, complex characters in any middle grade novel published this year. To invert one of the book's tropes, it's as if Schlitz has brought a set of porcelain dolls to life, and they don't always behave in the ways we expect. The secondary characters are delightful as well, especially the comically dramatic actress-cum-landlady and the oily, grasping Grisini.

All of them move within settings so real I have trouble believing that Schlitz is not hiding a time machine somewhere in her Baltimore home. The grubby London streets, the stuffy Wintermute home with its freakish Victorian mourning customs, the crumbling castle by the lake - all are painted in lurid color by Schlitz's richly layered prose. Of course, Schlitz has a gift for envisioning this particular time and place. I recently learned that she wrote the very first Regency romance I read as a teenager - A Gypsy at Almack's. I think it gave me unreasonable expectations for the whole genre.

If there is any complaint to be leveled at Splendors and Glooms, it is that the ending is unreasonably happy. Again, though, that goes along with the genre. Like Oliver Twist, Clara, Lizzie Rose, and Parsefall have been through so much that we can hardly begrudge them their hearts' desires. And I would certainly not begrudge Laura Amy Schlitz another gold medal.

Publication in August through Candlewick Press.
Posted by Rachael Stein at 11:14 AM