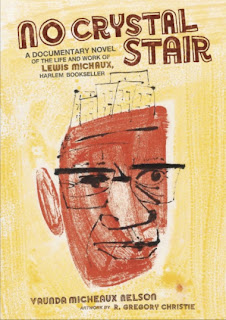 It's a problem that I suppose every reviewer -- maybe even every reader -- experiences at some point. What happens when your take on a book is starkly, radically different from the consensus? How does that change the way you approach your discussions of it?

As I read No Crystal Stair, I have to confess that I didn't find it very effective. Vaunda Micheaux Nelson is on the record as saying that she initially conceived of the book as a pure biography of Harlem bookseller Lewis Michaux, but was unable to make it work to her satisfaction, and switched instead to the hybrid "documentary novel." I didn't feel that it was successful either as a documentary or as a novel.

Structurally, it's chopped up into over a hundred seperate sections, none longer than two pages, and most much shorter, each from the point of view of someone in Michaux's story. I found that this strategy kept the book from developing any momentum, or developing any emotional heft. Without a consistent point of view, and without spending much time in any given part of the narrative, the book felt jumpy and fragmented. I thought it blunted the impact of Michaux's story to have him selling books from a cart, threatened with complete failure, and then a few pages later to have him and his bookstore doing well. As a novel, I just didn't think it worked.

But I didn't feel like it worked as a documentary either. Although Nelson's "About the Research" note in the back is helpful in this regard, it was very difficult while reading the book for me to tell what was fiction and what was fact. Michaux seemed like an interesting and important man, but it was hard to tell what I'd learned about Lewis Michaux the historical figure, as opposed to Lewis Michaux the character in a novel. It also seemed to me that a child reading the book would have a hard time following what was going on without some kind of encyclopedia or timeline of the Civil Rights Movement, as much of the background information felt overly elided.

So, if it were just me, I'd mark it as an interesting but highly flawed book with limited child appeal, maybe file Lewis Michaux as someone to find more information about later, and leave it there. But every other source that I could find rated it much more highly than that. I had trouble finding even a neutral review, and I utterly failed to find one that was negative. It got starred review after starred review in the major trade publications, earned high praise in the children's lit blogs, and won this year's Boston Globe-Horn Book Award for Fiction.

That leaves me at the very least questioning my own assessment of the book. If everyone likes No Crystal Stair but me, that seems like it might have more to do with me than with the book itself. And so, in the end, I don't really know what conclusion to draw. I feel less confident in my appraisal of No Crystal Stair than in any other opinion I've posted on this blog.

So, what of its Newbery chances? Well, since the first Boston Globe-Horn Book award was presented in 1967, there's not been much correlation between its winners and the winners of the Newbery; I counted six books that won both, with the most recent being When You Reach Me. It's hard for me to imagine it beating out some of the other serious contenders -- but again, my evaluation may not be the one you want to pay attention to here.


Published by Carolrhoda Lab/Lerner
Posted by Sam Eddington at 10:22 AM