The Winner's Circle: The Westing Game, by Ellen Raskin (1979) 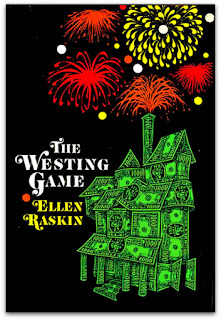 The Westing Game is an odd Newbery, one that exists as a kind of anomaly in the world of children's literature. Its genre, a sort of ensemble-cast mystery, bears much more resemblance to certain Agatha Christie novels than to any of its predecessors in juvenile fiction. Similarly, although there have been much-loved children's books since then that have elements of seemingly inscrutable mystery (When You Reach Me, The Puzzling World of Winston Breen) or that tie together huge casts of characters (Harry Potter, Criss-Cross), it's hard for me to think of one that really attempts anything analogous to The Westing Game.

I didn't encounter The Westing Game as a child, though it won the Newbery only a decade or so before the peak of my middle-grade fiction reading years. Reading it as an adult, I found it easier to admire than to like. The plotting is every bit as deft and intricate as its reputation would indicate; I've read precious few books for any age level that were as careful in their construction. But it felt empty somehow; though the characters were well-rounded, I had a very hard time connecting with them emotionally. It seemed like, given that there were sixteen choices, I should have been able to pick someone that I wanted to win the game. And Samuel Westing himself never fully snapped into focus for me; he seemed more like a semi-benevolent Jigsaw -- a plot device, rather than a real character.

Indeed, the tone of the book -- its full-on embrace of a rose-colored American Dream, its sentimental patriotism, its eulogizing of stock-market capitalism -- seems out of step with the post-9/11, Great Recession-scarred world of today. Its hero is the character who eventually becomes a lawyer, an MBA, and, it's hinted, the CEO of a large corporation, and yet never shares the answer to the game with anyone, not even her eventual spouse (who, it should be added, also played the game). I have a feeling that this isn't the facet of the book that most people who look back at it fondly are remembering -- and maybe I'm letting my personal views overly shape my reading of the novel -- but I found its moral center genuinely uncomfortable.

Perhaps too, I'm simply not the reader for this book. As I've mentioned before, I'm in general a character and setting reader rather than a plot reader, and so I'm in less of a place to appreciate the (genuine) merits of The Westing Game than someone else might be. It reached #9 on Betsy Bird's latest top 100 children's books poll, so there is obviously a large cadre of readers who are suitably impressed by Ellen Raskin's novel.

And, with all of that said, The Westing Game certainly wasn't a bad Newbery choice, even though its year was very crowded. The only Honor book was The Great Gilly Hopkins, by Katherine Paterson (#63 on Betsy's last poll) -- which means that the committee couldn't find room for Sideways Stories from Wayside School, by Louis Sachar; Anastasia Krupnik, by Lois Lowry; or A Swiftly Tilting Planet, by Madeline L'Engle. I probably would have chosen Sideways Stories, but I recognize that The Westing Game does what it does very well indeed, even if it wasn't a book for me.
Posted by Sam Eddington at 1:44 PM