The Ones That Got Away: The Golden Compass, by Philip Pullman (1996) 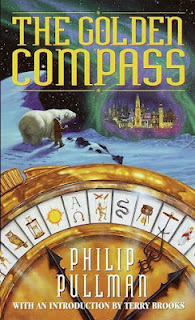 From its inception, part of the Newbery's purpose has been to encourage the American publishing industry to put out quality books for children. It's an award whose focus is national, not global, and so is specifically limited to books by authors who are citizens or residents of the US. Certainly, in 1922, when the state of American children's publishing could be charitably described as "developing," that made plenty of sense. But one of the questions that has come up repeatedly in the years since then is whether or not that particular criterion has outlived its usefulness.

As a point of comparison, there is a British equivalent to the Newbery, the Carnegie Medal in Literature, awarded by the Chartered Institute of Library and Information Professionals, the UK version of ALA. When it was established in 1936, it had an analogous rule that limited winners to UK authors; however, that rule was rescinded in 1969, and authors from several foreign countries have, in fact, taken the prize. (For you trivia buffs out there, the only book to win both the Carnegie and the Newbery is The Graveyard Book, by everyone's favorite English expat, Neil Gaiman. The only other author to win both awards is Sharon Creech, who took the Newbery for Walk Two Moons and the Carnegie for Ruby Holler.)

Which model is preferable, the British or the American? I'll confess that I don't really know. What I do know, however, is that there are several occasions in the history of the Newbery where that rule has likely played a significant role in the outcome. Maybe the easiest one to take as an example is 1996, when the Carnegie was awarded to the Newbery-ineligible Philip Pullman novel Northern Lights, or, as it's known in America, The Golden Compass.

Although it was published less than two decades ago, Pullman's novel and its sequels are firmly ensconced in the pantheon of Children's Fantasy Classics, in the same rarified air as The Dark is Rising, The Chronicles of Prydain, the Earthsea books, The Chronicles of Narnia (to which Pullman's books are an explicit reply), The Hobbit, and the Harry Potter novels. It's the darkest of those books, from the paranoia of its religious figures (which earned it any number of challenges) to its horrific quasi-medical experiments that remind one of nothing so much as the WWII-era atrocities of Josef Mengele and Shirō Ishii. But its world-building is astounding, and its characterizations highly detailed; it's a challenging read, but one that provides rich rewards in return for its demands.

Would it have won in '96, had it been eligible? It might well have. The winner that year, Karen Cushman's The Midwife's Apprentice, isn't nearly as well-regarded today as The Golden Compass, and there weren't any snubs that indicate that year's committee wasn't friendly to fantasy. (The other best-remembered title of the year was probably The Watsons Go to Birmingham-1963, by Christopher Paul Curtis, which honored.) I'm unconvinced that any other children's book of that year took as many risks, much less navigated its way through them successfully. And as a result, I really believe that, if we were playing by the same rules as the Carnegie, Pullman would have a Newbery Medal to add to his shelf o' awards.
Posted by Sam Eddington at 11:26 AM

Email ThisBlogThis!Share to TwitterShare to FacebookShare to Pinterest
Labels: The Ones That Got Away