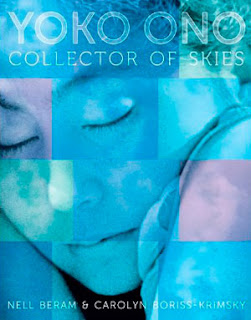 It's hard for me to think of another major artist as divisive as Yoko Ono. When you combine the reactions to her work in visual and performance art, writing, and music, as well as her oft-maligned presence in later sessions by the Beatles, even Damien Hirst, Andy Warhol, and Marcel Duchamp start to look uncontroversial.

But make no mistake, Ono is a major artist. Yoko Ono: Collector of Skies makes this case eloquently, discussing her role as a progenitor of conceptual art, a pioneering feminist, and a genuinely forward-thinking musician. (Laugh at that last one if you want, but did you realize that Ono has had 10 singles hit #1 on the US Dance charts?) The book takes a straight chronological approach, which is probably a good choice, as it lets the reader follow Ono's progression from lonely child, to art-world enfant terrible, to That Lady Who Must Have Broken Up The Beatles, and on to her place now as a highly respected artistic elder stateswoman. It's not shy about detailing some of the more unpleasant moments in Ono's life either; in that respect, it reminds me a bit of Candace Fleming's refreshingly honest Amelia Lost.

The prose is clean and clear, and makes good use of liberal quotations from Ono's own work. Conceptual art isn't necessarily easy for a child reader to grasp, but Nell Beram and Carolyn Boriss-Krimsky do an excellent job of integrating needed definitions and background into the body of the text without drawing undue attention to them, or resorting to distracting sidebars. Readers who don't know Ono's work at all -- or who know it only as a punchline -- will walk away from Collector of Skies with a profound understanding and appreciation for her art.

Despite being an excellent biography, Collector of Skies probably isn't going to win anything from the Newbery committee. It's a very traditionally-structured bio, and in recent years, the nonfiction that's received Newbery love has tended to be the kind that's more deliberately literary, using techniques from fiction, or paying special attention to the way the story in question interacts with other stories (see: Hitler Youth, Claudette Colvin, Bomb). Depending on the competition, however, the Sibert committee may well find a lot to like here.


Published in January by Amulet / Abrams.
Posted by Sam Eddington at 3:29 PM