2014 Contenders: The Fellowship for Alien Detection, by Kevin Emerson 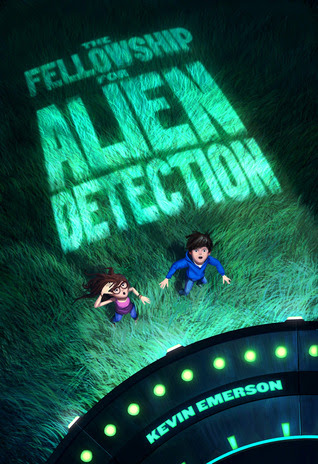 Haley is the kind of eighth grader who's already trying to pad her future college applications. She applied for the Fellowship for Alien Detection on a whim, as an alternative to her usual music camps and other enriching activities. Dodger is a shy loner who already feels like a failure at age thirteen. His parents are surprised when he's awarded the Fellowship for Alien Detection, since he's not exactly scholarship material. Both kids have stumbled upon some strange occurrences. Missing time. Missing people. Radio broadcasts from towns that don't exist. When they set out to investigate, from opposite sides of the country, they're hoping for a good story for their field reports, but they have no idea how far the Fellowship will take them.

And this title will be an easy sell to those Whovians. It's heavy on plot, with a spooky, intricate mystery that takes most of its 400 pages to unravel. I'm inclined to look askance at middle grade novels once they pass the 300 page mark, but this one doesn't feel particularly bloated. The skillful pacing spaces out the plot twists and cliffhangers effectively enough to keep the momentum going right up to the end. Plus, it's a standalone. The door is left slightly open for a sequel, but there is a full, self-contained story here, which is refreshing in these days of endless Chronicles of This-and-That.

This title should definitely be on your summer booktalk roster.

It will, however, probably not show up on the Newbery discussion table. The characters are inconsistently developed. Dodger's dad is complex - both infuriating and oddly sympathetic. Haley's parents and brother, on the other hand, are vague, blurry presences. Some of the settings are well-realized - especially the stark desert landscape - but some are barely noted. The best I can say for the prose style is that it's cinematic... not always in a good way, when we're measuring for literary distinction.

That same fast-paced cinematic prose makes this an excellent summer vacation book, though. I'm going to pass my copy along to a cool, smart, alien-loving eleven-year-old girl.

Published in February by Walden Pond Press
Posted by Rachael Stein at 10:22 AM