2014 Contenders: Etched in Clay: The Life of Dave, Enslaved Potter and Poet, by Andrea Cheng 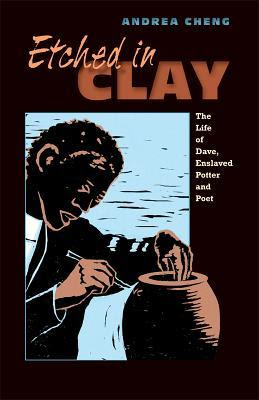 We know comparatively little about the life of Dave, the enslaved potter. We know roughly when he was born (around 1801), when he died (around 1870), and where he lived (South Carolina). We know that he lost a leg when he was about 35 years old, and that he was a skilled potter whose works were (and are still) prized by collectors. Most notably, we know that he could read and write, because he carved his name and some short poems into the clay of his own pots.

In a series of dramatic monologues, Andrea Cheng fleshes out these sparse details and shapes them into a poignant glimpse into the world of this remarkable artisan and poet. Writing from multiple perspectives, she gives the reader a panoramic view of the social and political realities that circumscribed the life of an enslaved man in 19th century South Carolina. In understated verse, she recreates the key moments of Dave's life, including enough sensory imagery to anchor the story without bogging it down in detail. Woodcut illustrations, also by Cheng, mesh well with the plainspoken text.

Overall, Etched in Clay is an effective and engaging verse biography. It is worth noting that Cheng takes a completely different approach than Laban Carrick Hill and Bryan Collier did in their 2011 Coretta Scott King Honor Book, Dave the Potter. Where Hill and Collier focused narrowly on Dave's work as a potter, Cheng attempts to paint a much broader portrait of the man and his times. It's an ambitious tactic, and one that leads to some pitfalls.

My biggest issue with multiple-perspective verse novels is how damnably hard it can be to distinguish among the speakers, and Etched in Clay is no exception. Without contextual clues, I think I would be hard-pressed to tell the difference between Dave and any of the other characters. Part of the problem is Cheng's decision to standardize the language for modern readers. It works well in practical terms, but since everyone is speaking modern American English, they all end up sounding the same. That creates a jarring contrast with the snippets she includes of Dave's own rough, lyrical poetry.

My other issue is with the inclusion of historical background. It's very difficult to throw in details about law and social norms within the confines of a dramatic monologue, without turning it into an instance of As You Know, Bob. That leads to clunkers like the following: "Just be forewarned / while allowing our slaves / to read is our duty / teaching them to write / is punishable / by South Carolina law."

These are relatively minor quibbles, but they will probably keep Etched in Clay from attaining the status of "most distinguished" for me. I will surprised, however, if we don't see this one on the Notables list at the very least.

Published in January be Lee and Low Books