2014 Contenders: The Canary in the Coal Mine, by Madelyn Rosenberg 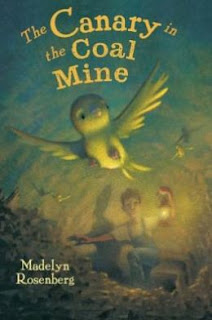 Even today, coal mining isn't a job for the faint of heart, and it was a good deal more nerve-wracking during the first half of the twentieth century. Yearly mine fatalities in the USA peaked in 1907 at a mind-boggling 3,242, and it wasn't until 1946 that that number first dipped below 1,000. (For the record, there were 19 fatalities in 2012; that's still 19 too many, but it's a far cry from those four-digit numbers.)

The Canary in the Coal Mine is set in 1931, in Coalbank Hollow, West Virginia. The book centers around Bitty, one of the canaries that the miners took below ground with them to warn of the toxic gas that was a common reason for those fatal accidents.

Of course, the way a canary gives that warning is by passing out, and possibly dying. It's dangerous work -- needlessly dangerous, in Bitty's mind. The canary takes it into his head to travel to the state capital and communicate the plight of both canaries and miners to the politicians there, undeterred by the fact that communication between birds and humans is seemingly impossible.

The plot from that point won't come as too much of a surprise to anyone who's read Charlotte's Web or The One and Only Ivan. However, Bitty and his fellow animals are engaging companions for the journey, and watching the little canary grow from a brave but naive idealist to a wise, strong protagonist is enjoyable. And the fact that the whole thing is told from the animals' perspective makes the book stand out from the many other depression-era historical novels for middle-grade readers.

I don't think that The Canary in the Coal Mine stands out sufficiently from its influences to be a strong Newbery contender this year; it also can't match the technical grace of The Water Castle or the glittering prose of One Came Home. It's a good book though, and one that the talking animal fans in your libraries should take to eagerly.


Published in April by Holiday House.
Posted by Sam Eddington at 12:23 PM