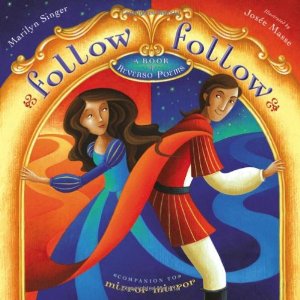 Good poetry is hard to write, and good formal poetry can be even harder. Follow Follow, Marilyn Singer's newest book, consists of poems in a fiendishly tricky form: the reverso, in which the poem tells a story one way, and then, when the lines are read in the reverse order, tells a different one. The only allowable changes are in punctuation and capitalization.

That this book works, and works marvelously, is a testament to Singer's skill with words. Each poem (except the first and last, which deal with the poet's craft) takes a classic fairytale or fable and looks at it from two angles. It's really stunning how different the same words can be when reversed.

My favorite example of this is "The Little Mermaid's Choice." The opening lines of the first part encourage the traditional plot of the tale: "For love, / give up your voice. / Don't / think twice." However, the same words form the cautionary closing of the second part: "Think twice! / Don't / give up your voice / for love." It's a perfect inversion, and a good sample of the craft evident in the rest of the book.

Although it's something that can't be taken into Newbery consideration, the formatting of the book is lovely. Each two-page spread features the poem, printed in two columns (one for each version), as well as a lavish full-page illustration by Josée Masse. It's beautifully done, and so much more child-friendly than many of the other poetry books for kids that I often see.

Follow Follow comes billed as a "companion to" Mirror Mirror, Singer's first book of reversos, which was a 2011 Notable. However, there's no reason that they need to be read together; it's definitely a stand-alone. Anyone who enjoyed Mirror Mirror, however, will find plenty to love here.

It's hard to judge exactly how good Follow Follow's Newbery chances are. Poetry rarely wins -- the last time it did was with Joyful Noise in 1989 -- but there have been recent honors for The Surrender Tree (2009) and Dark Emperor (2011), and at any rate, the committee is different every year. Regardless, however, I'm putting this book firmly on my "keep this one in mind to return to later in the year" list.


Published in February by Dial / Penguin Young Readers
Posted by Sam Eddington at 9:56 AM