2014 Contenders: Penny and Her Marble, by Kevin Henkes 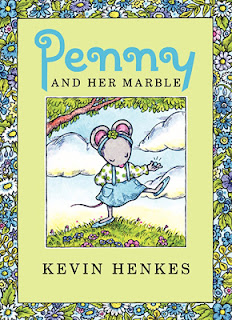 Ah, Kevin Henkes and his Penny books. We spent some time with them last year, covering both Penny and Her Song and Penny and Her Doll in this space. It led to a discussion of whether or not an Easy Reader capable of winning the Newbery could possibly be written; my opinion was that the answer was probably not, not even if it was as excellent as the Penny books. And, save for my surprise when both titles were shut out of the Geisel awards, that was where I had planned on leaving the matter.

However, I was prompted to have a look at Henkes' most recent installment, because, according to at least one measure, it's the most acclaimed book of the year so far. As noted by Elizabeth Bluemle in her latest The Stars So Far, Penny and Her Marble is one of only two books this year to receive five starred reviews -- and the other, Marcus Sedgwick's Midwinterblood, is a) a YA title, and b) not eligible for any ALA awards, as it was originally published in 2011. Anything with that much buzz about it is probably worth further investigation.

In this book, Penny is taking a walk with her doll (the same one from Her Doll, in a nice bit of continuity), when she finds a marble on the neighbor's lawn. It's a beautiful marble, and so she picks it up and takes it home -- but that's when the nagging suspicion that maybe it's not really hers to take begins to eat at Penny and spoil her good mood.

It's a well-done book, certainly -- it's Kevin Henkes, who has both a Caldecott Medal (Kitten's First Full Moon, 2005) and a Newbery Honor (Olive's Ocean, 2004) to his name, and who I don't believe has ever put his name on anything that wasn't at a minimum above average. Like so much of his work, Penny and Her Marble takes a common childhood experience and invests it with poignancy, while treating a child's thoughts and concerns with profound respect. It's what the man does, and he does it as well as ever.

I'm not sure, however, why this entry in the series has gathered the most acclaim. I think the plot in Penny and Her Doll was more tightly constructed, and that Penny and Her Song did just as good a job of getting inside the head of a child dealing with a conflict. Penny and Her Marble has a more obvious moral than either of the other two, though I wouldn't by any means call it didactic -- but I'm from the school that thinks of a moral lesson as an attribute, rather than a virtue (to swipe a phrase from the late, great Roger Ebert). The other two books, wonderful as they were, weren't recognized by the Newbery committee, and it's hard for me to see how this one will be different.

Anyway, Penny and Her Marble is an awesome book, and maybe it'll be the one in this series to earn Henkes some kind of Geisel love; if it does, it will be well-earned. I don't, however, see it being a serious Newbery contender.


Published in February by Greenwillow / HarperCollins
Posted by Sam Eddington at 11:41 AM